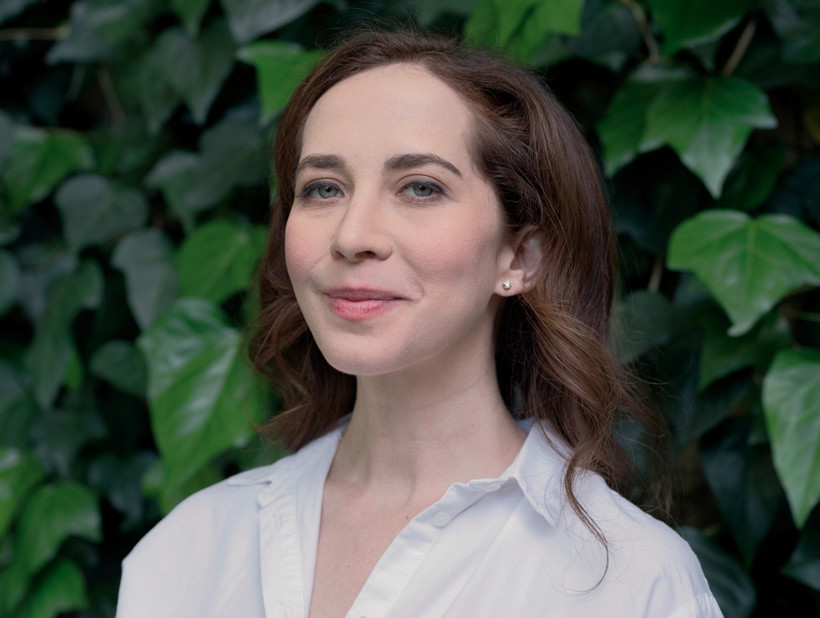 Author Bess Kalb Channels The Voice Of Her Grandmother

Bess Kalb spent eight years writing comedy for Jimmy Kimmel's late-night television show. She was nominated for an Emmy for her work and also wrote for the 2012 "PrimeTime Emmy Awards" ceremony hosted by Kimmel. Now she's written her first book — a best-selling poignant and funny memoir called "Nobody Will Tell You This But Me: A true (as told to me story)." She told WPR's "BETA" the origin story behind the book.

"I was tasked with delivering a eulogy at my Grandma Bobby's funeral, and I was at a complete loss for words. I didn't know what to write, how to properly eulogize the woman who meant so much to me. And so I decided to just do a riff on one of the voicemails that she left me," Kalb said.

"I did it for my whole family. It killed," she continued. "They were laughing. Some of them cried. And most of all, they recognized her voice and what I was doing. So I just kept doing that. I kept sort of extrapolating from conversations we had and voicemails she left me. I kept writing as her. And that was a way for me to feel close to her when she was gone."

"It was one of the easiest writing assignments I've ever had. It really did come naturally to me," Kalb said. "She and I spoke so frequently during her life that I felt like I had almost downloaded her into me. I had 10,000 hours of conversations that I could sort of autogenerate her at a moment's notice."

In the book, Kalb goes back three generations by having Grandma Bobby talk about her own mom — Kalb's great-grandma, Rose. Rose died long before Kalb was born but Kalb has vivid memories of Grandma Bobby's constant references to her. Through research and interviewing family members, Kalb learned that her great-grandma was "nothing short of a hero."

"She's an immigrant who escaped the shtetl (a small Jewish town) in the Pale of Settlement in Belarus under czarist control when she was 12 years old. And she did that by herself and she did that with nothing," Kalb said.

Kalb's great-grandma came to the United States unable to speak English, and managed to raise four boys and a daughter in Greenpoint, Brooklyn. Kalb said that Rose wasn't a very affectionate mother. But as a woman who came from a culture and life of suffering, Rose sacrificed everything for her children. Rose taught Grandma Bobby lessons that Kalb has internalized. Lessons such as "if you're having a rotten day, buy yourself an ice cream soda and a new hat."

Kalb interviewed her own mom several times for the book. And from these conversations, she learned that Grandma Bobby was a "distant bad mother and a close, good grandmother."

"Initially, the project of the book was to explore how love can skip a generation," Kalb said. "And that was something that I think a lot of people can relate to, which is grandmothers who weren't necessarily present moms ended up being super-attentive, doting grandparents. And what I found was much more complex than that. My grandmother deeply loved my mother and my mother deeply loved her mother, even though their relationship was fraught and tense and full of rebellion and fights. I found that there were some big moments in my grandmother's life with her daughter where she was absolutely a hero."

Such as the terrible first marriage that Kalb's mother found herself in. Grandma Bobby showed up at Kalb's mother's door in the middle of the night and drove her to the airport to leave the country and stay at her friend's home in Canada. Then Grandma Bobby and Kalb's grandfather handed the husband a check to walk away.

"I think there's this sort of distance that makes a relationship closer, that she wasn't my mother, she wasn't the person responsible for getting me into my winter jacket, you know, insisting that I eat my broccoli," Kalb explained. "She was somebody who would just sort of waltz in and have the fun times — a friend. And so with that sort of layer of removal from my everyday life, I felt like she and I just got along without any of the tension that a parent-child relationship might be subjected to."

Grandma Bobby was always supportive of Kalb's desire to write: "She always celebrated even the smallest paragraph ... She learned how to use a laptop because most of my writing early in my career was online."

This encouragement gave Kalb the confidence and determination to enter a writer's room where there were only a couple of other women writers and a dozen men.

Kalb points to two important life lessons that she learned from her grandmother.

So what does Kalb think Grandma Bobby would think of her book?

"I think she would be glad that she has this megaphone now," said Kalb. "My grandma loved to tell stories and I think she'd be really heartened by the fact that everyone who's read the book now knows her stories."