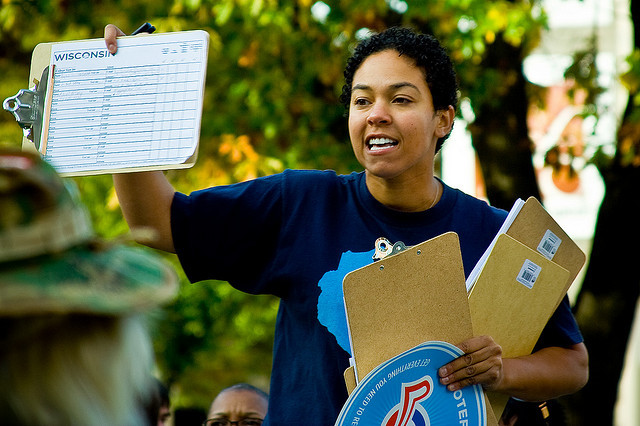 A volunteer in Milwaukee promoting early in-person absentee voting in the weeks before the 2008 general election. Photo: Ryan Rowley (CC-BY-ND).

Early in-person absentee voting begins on Monday for Wisconsin's Aug. 12 partisan primary, but for the first time it won't be available on the weekend.

This will be the state's first election since Gov. Scott Walker signed a law that ended weekend voting and restricted early voting to weekdays between 8 a.m. and 7 p.m.

Government Accountability Board Director Kevin Kennedy said that in practice, hours will vary by municipality and may require an appointment with the clerk in some small communities. He said he does not expect long lines of people waiting to vote early at their local clerks' offices for this primary.

“I think you'll find that even clerks have tailored their office hours to reflect that,” said Kennedy. “As a general rule, we get about a 15 percent voter turnout for the partisan primary, and the early voting is going to dovetail that.”

Kennedy said the people who notice the disappearance of weekend voting immediately will be those who have to work on weekdays.

“That will be the challenge, and people who can't get there until after 7 p.m. at night won't have that opportunity,” said Kennedy. “But people can make a written request to have the ballot sent to them by mail.”

Republicans said restricting early in-person absentee voting at local clerks’ offices was about ensuring a sense of fairness from one community to the next. Democrats said it was about driving down turnout in Democratic strongholds like Madison and Milwaukee, where early voting is popular.

Early voting at clerks' offices will continue until Friday, Aug. 8.

Health care associations urge Wisconsin Supreme Court to rule against court-ordered ivermectin for COVID-19
Wauwatosa school board member sues his own board after it approved new gender identity curriculum
Wisconsin utilities prepare for attacks like the one in North Carolina that left thousands without power
Majority of Wisconsin US House delegation votes for Respect for Marriage Act
A CAFO, contractors lied about how much manure they spread on fields. Now the state is suing them.