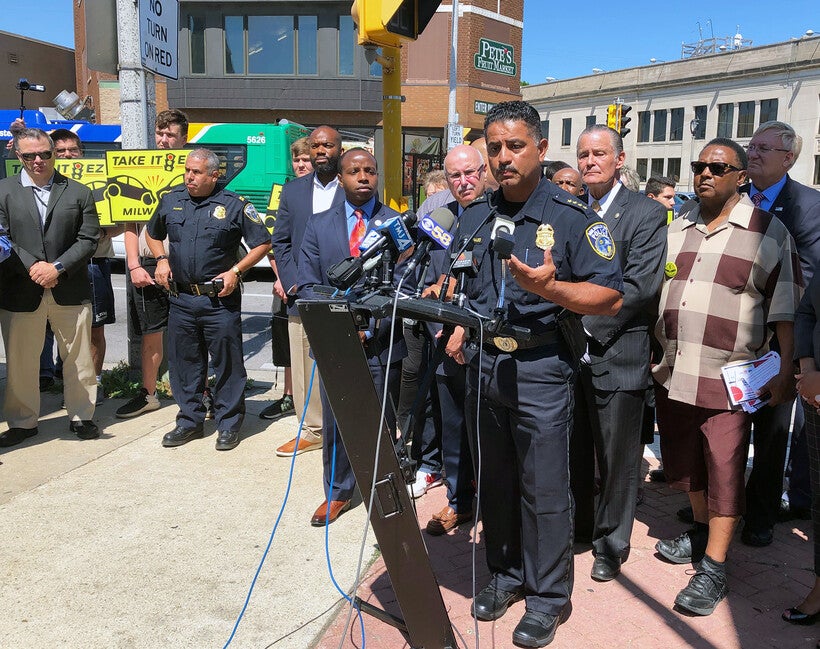 The attorney for embattled Milwaukee Police Chief Alfonso Morales says he has been set up to fail by the city's Fire and Police Commission and alleges the group intends to fire him.

Attorney Franklyn Gimbel and Morales appeared together Tuesday at a virtual Milwaukee Press Club luncheon. Gimbel said a member of the commission has been having conversations with an existing police officer to be Morales’ replacement.

Wisconsin Public Radio reached out to the Fire and Police Commission Tuesday afternoon but was unable to contact commissioners.

On July 20, the Fire and Police Commission issued 11 directives to Morales, ranging from a community policing requirement to the implementation of the city’s mask mandate in the department, as well as a range of data requests. The directives must be met by Thursday.

Morales said his plan is to fulfill the directives. In the days since they have been ordered, there have been 10 homicides and 64 non-fatal shootings in the city, Morales said. Milwaukee has had more than 100 homicides so far this year, more than double the same time last year.

"For me as a chief of police, the crime is the most important thing to have a grasp and a handle of," Morales said. "For me and my executive staff, it takes us offline to do that."

Gimbel said the commission is using Morales as a scapegoat to distract from its own problems. Commission Chairman Steven DeVougas refused to resign despite findings from an independent investigator that he likely committed ethics violations. In addition, the group’s executive director is stepping down because of what she described as a toxic political environment.

Gimbel said he hopes the commission realizes there will be a public outcry if Morales is fired.

"If on the other hand they don’t, then the chief and legal council and those other people close to him will have to make a decision whether or not they want to litigate that result," Gimbel said. "There is no game plan today of a certain form of litigation (if Morales is fired)."

Morales' job is at stake two weeks before the Democratic National Convention arrives in Milwaukee on Aug. 17.

Morales said he is still working on a staffing plan for the event and deciding whether it will rely on police officers or National Guard members. There have been reports that there will be 900 National Guard officers in Milwaukee.

"As far as today and for the DNC, there is no change in the policy for how we handle civil disturbances," Morales said.

Last week, the Milwaukee Journal Sentinel reported that several local police departments have pulled out of security agreements for the 2020 DNC, with some citing not being able to use crowd control tools, including tear gas.

Morales said despite the DNC being scaled back to a mostly virtual event because of the coronavirus pandemic, the Police Department is still preparing to be under the national spotlight.

"We’re still going to have potential protests that have to be monitored," Morales said. "As far as the law enforcement agencies not able to come, our planning even though downsized, we still need to secure the event, and work with the ones who are coming."

Gimbel added that even though delegates aren’t coming, this is where "media will come to pass through to the universe what the Democrats are doing."

"And that’s like putting bait into a rat trap for protesters who want to spew whatever their political agenda is if its contrary to the Democratic Party political platform and that’s a place for police because you could have two delegates here and you could have 20,000 protesters," Gimbel said.