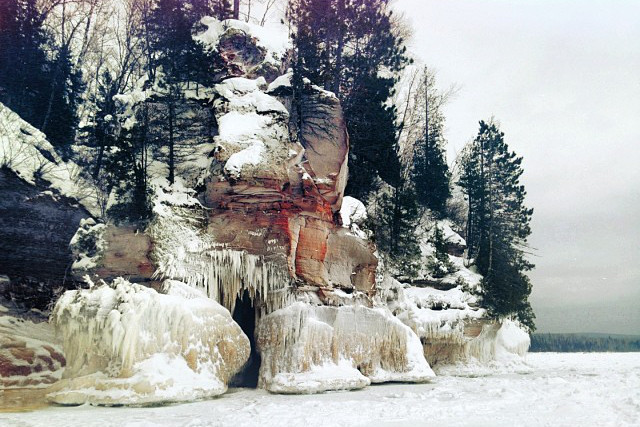 Record Is Expected To Be Broken Again This Weekend
By Mike Simonson
Share:

The Apostle Islands recorded another record number of visitors to the famous ice caves last weekend.

When the ice caves were accessible from land for the first time in five years last month, the Apostle Islands expected a great turn-out – maybe even 2,000 people per weekend.

They were off by a zero: More than 20,000 people visited last weekend. Apostle Islands Resources Manager Julie Van Stappen says if you include 3,500 people last Friday, the three-day total was almost 25,000 visitors.

“It’s a phenomenal number of people,” said Van Stappen. “It is really cool to see all kinds of people – young and old and in-between – being able to get out in the winter like that and enjoy them.”

The surge is being felt at restaurants in Bayfield, Red Cliff and nearby Cornucopia. Lisa Bresette, the bar manager at Maggie’s in Bayfield, said they’re getting 300 to 400 people a day. Even weekdays are getting busy.

“It’s nice to have business in the winter that we normally don’t have,” said Bresette.

So far, 60,000 people have visited in the past month and Van Stappen doesn’t think the numbers have peaked yet.

“Each weekend we have been breaking records,” said Van Stappen. “And we’re anticipating with the Birkie happening this weekend, we may be breaking another record. We’re trying to gear up as best we can, but it’s more people than we’ve ever seen.”