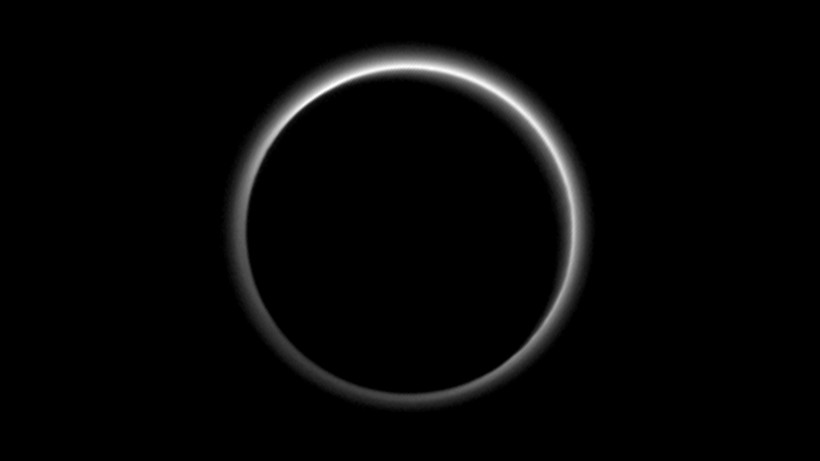 This July 15, 2015 image made available by NASA shows the atmosphere of Pluto backlit by the sun when the New Horizons spacecraft was about 1.25 million miles away. The image, delivered to Earth on July 23, is displayed with north at the top of the frame. NASA/JHUAPL/SwRI via AP

Astronomy Professor: What We Know About Pluto Is More Important Than Its Title

Pluto has been absent from the planetary mnemonic device for more than a decade, but now some scientists are claiming My Very Educated Mother Just Served Us Nine Pizzas should make a comeback.

Pluto, the former ninth planet and black sheep of the planetary system, is reigniting a fight led by scientists who claim the definitions used to exclude Pluto as a planet aren't valid.

But Jim Lattis, who teaches astronomy at the University of Wisconsin-Madison and is director of the UW Space Place, said the focus should be more about what Pluto is revealing about the solar system and beyond, not how it's categorized.

"The stuff we actually know about it is way more important than what we call it and that's all wonderful stuff," he said.

Frustration over the declassification of Pluto as a planet and the perceived "deprivation" of its title is irrelevant, Lattis noted. Because as what's being learned about the universe and solar system is constantly changing, so too is the language that describes those new findings.

"It's great to talk about what these objects are but the labels are arbitrary and bound to shift anyway with our growing knowledge," he said. "That's what we see happening here."

The feud over Pluto started in 2006, when the International Astronomical Union reduced the Kuiper belt object to a dwarf planet after adding new criteria to the definition of a planet. Planets must orbit stars, must be round because of their own gravity and must have cleared the area around their orbit, the new rules said.

Pluto didn't meet the third criteria (its orbit crosses Neptune's) and was cast out, reducing the solar system to eight planets.

But recently, scientists made the case that it is the geophysical differences between non-planets and planets that define their categories, not whether they share orbits. The research, published in the science journal Icarus, focused on the classifications of asteroids and planets since 1801. This July 2015 image made by the New Horizons spacecraft shows dunes, small ripples at bottom right, on Pluto's Sputnik Planitia ice plain. At upper left are a series of mountains. Researchers say the dunes appear to be made mostly of icy specks of methane the size of sand. Thought to be relatively recent, the dunes are located in Pluto’s heart-shaped region at the base of water ice-block mountains with methane snowcaps. (NASA/Johns Hopkins University Applied Physics Laboratory/Southwest Research Institute via AP)

Lattis likened it to the once-common belief that planets were whatever comets and stars were not.

"The sun and the moon were considered planets at one time," he said. But more education about the way the solar system functioned clued scientists into the fact that the Earth, not the sun, was moving. "Suddenly the Earth, which was not a planet, now is a planet."

The current definition of planets excludes Pluto, which has a "tiny mass" and, like an asteroid, isn't dominant in the Kuiper belt, but there's still some question about what it means for an object to be dominant — a subjective point that helps keep the Pluto-planet debate alive.

Having some sort of taxonomy to follow allows astronomers to organize their findings, but Lattis maintains that the answer isn't to redefine a generic word, such as "planet," even if it does bring attention to the solar system.

Whatever people decide to call it, there's still much about Pluto that remains undiscovered.

Lattis pointed to new images released of Pluto from the New Horizons mission in 2015 as showing the solar system's frontier as active.

"These bodies interact with each other and in ways that produce really interesting and completely unseen topographies on the planet and chemistries that we have no experience of," he said.

While Pluto's internal structure isn't known, scientists can understand some of its history and the way it interacted with other planetary bodies.

Lattis said there's still much to be discovered.

"We need to know more about bodies like that to understand the formation of the solar system," he said.