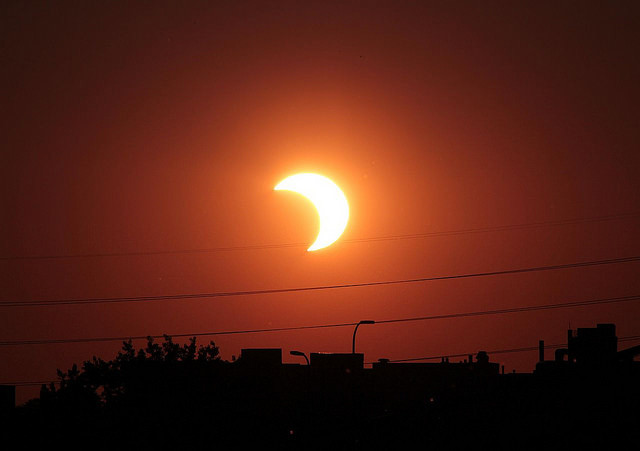 A partial solar eclipse occurs when the moon passes between the sun and the Earth. Photo: NASA Goddard Space Flight Center (CC-BY).

Author Says Solar Events Are Great For Those Who Aren’t Night Owls
By Judith Siers-Poisson
Share:

Stargazers will have the chance to see a rare astronomic phenomenon -- a partial solar eclipse -- on Thursday.

That occurs when the new moon passes in front of the sun, temporarily blocking view of it from the Earth. It’s really trick of perspective and distance that makes the sun and moon appear to be about the same size in the sky, according to Paul Kinzer, author of "Stargazing Basics: Getting Started in Recreational Astronomy." “The sun is actually about 400 times farther away than the moon, and it’s about 400 times wider,” he said. “So, they appear the same size.”

Kinzer explained that the crossing of those trajectories is possible, but not frequent, because while the Earth circles the sun, the moon circles the Earth.

Similarly, Kinzer said that two weeks ago, there was a lunar eclipse. That event is when the moon is on the opposite side of the Earth from where it is for a solar eclipse. When the moon is in that position, it is the Earth that passes between the sun and the moon and casts a shadow.

Clouds can significantly obscure viewing of an eclipse, but Kinzer said that if the clouds cooperate on Thursday, right at sunset is a good time to see the partial eclipse.

That process will continue until about 6 p.m. Eventually, about half of the sun will be covered, which will give the impression of a “crescent sun,” he said.

To determine best places and times to view the partial solar eclipse, there is an online resource in which to plug in a location.

The extent of the eclipse is determined by the placement of the moon, which can vary in its height. The next full solar eclipse is due in August 2017. For optimal viewing of that full eclipse, Kinzer said that Wisconsin residents might need to travel a few hundred miles.

But given that, according to Space.com, it can take between 360 and 375 years for a total eclipse to be visible form a specific location on Earth, astronomy fans might decide it’s worth it to travel.

Solar eclipses are great for people who like astronomy but don’t relish getting up at 2 a.m. or 3 a.m., Kinzer said. Not only is the sun there every day, but he said that there are often interesting events to observe, like a sun spot or magnetic solar storm, that is currently visible.

The size of that sun spot is probably 10 times bigger than Earth, he added, which is a very large event.

Even during an eclipse, it can be dangerous to look directly at the sun. NASA offers advice for safe viewing.

For those unable to get outside to watch or if conditions aren't ideal, it is possible to watch Thursday’s eclipse online starting at 3 p.m. Central Time. The feed is courtesy of the Slooh Community Observatory in Connecticut.

The YouTube video below gives a much clearer view of a partial solar eclipse than Earth viewers will see.