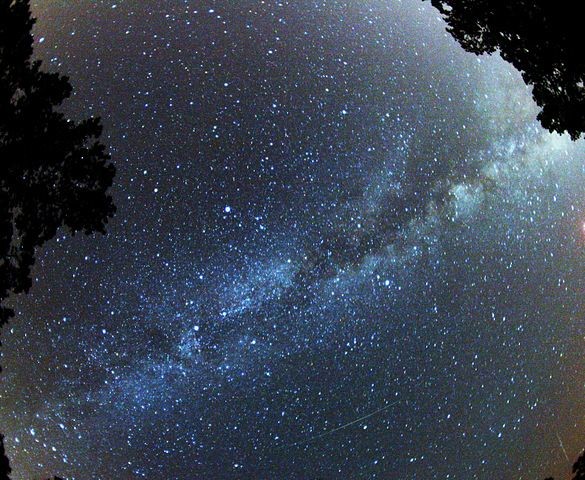 Some years, the Perseid meteor showers put on quite a show. But a concurrent Supermoon this month will make viewing tricky. Brocken Inaglory (CC)

Astronomers: Perseid Meteor Showers Will Be Tough To Spot This Year Thanks To 'Supermoon'

The annual Perseid meteor showers are the most prolific of the summer and a favorite among summer stargazers.

This year, however, the period during which they will be at their peak -- Aug. 10 to Aug. 13 -- coincides with an astronomical event that will make good viewing difficult.

Tom Hall, an optics specialist with Eagle Optics in Middleton, said that there has been a lot of “media hype” about the rise of a "Supermoon" on Aug. 10.

“We used to just call it a full moon,” he said. “But, this one occurs near perigee, which means that it’s closest to the Earth. So, that means it appears larger in the sky.”

Hall said that while it does appear closer, the difference is negligible, and hard to really detect without a “regular” full moon to compare it with.

“I worry that people are going to get all excited about the Supermoon and go out and say, ‘I’ve seen that before, that’s just a full moon’,” he said.

For people still hoping to catch a glimpse of the Perseids, Jim Lattis — a faculty associate in the Astronomy Department at the University of Wisconsin-Madison and director of the UW Space Place — has some suggestions. He said that trying to find a viewing place where the moon is behind you can help, and if a building is available to block some of that moonlight, all the better.

Hall also recommended going out later than usual, “when that full moon is over into the western half of the sky and the … radiant point of the meteors comes up in the east later at night.”

Hall said that despite the Supermoon, it’s still worth taking a look: “You just won’t see as many meteors as when we have a nice dark sky.”

For those disappointed by the timing of this year’s Perseids, Hall pointed out another astronomical event to watch for: On Aug. 18, the planets Jupiter and Venus will be visible in the morning sky and “extremely close together.”

“That looks like it will be a great one,” he said.

Lattis added that they will rise just before the Sun that morning.