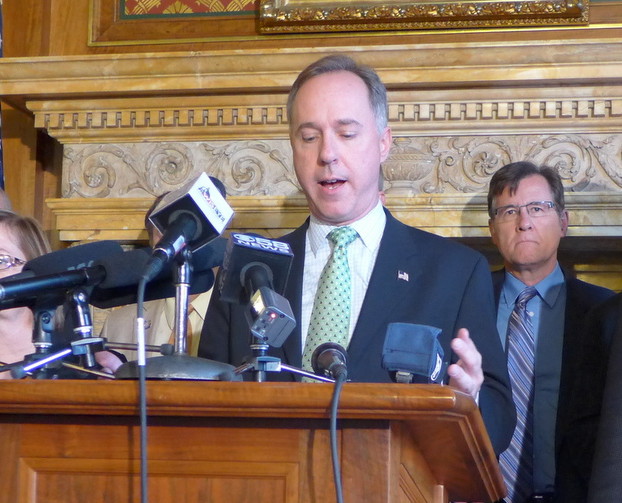 Assembly Speaker Robin Vos discussed his caucus's agenda for the next legislative session on Wednesday, outlining a plan that involves changes to campaign finance law and policy at the University of Wisconsin.

Vos, who himself easily beat a Democratic challenger in his southeastern Wisconsin district on Tuesday night, said that one change he wants is to begin letting businesses donate money directly to political parties instead of third-party groups.

“I'd like to have more parity between the parties and between the organizations, so we don't have the need for having so many organizations give money to a third-party group when they could give it to a party, which is more transparent,” said Vos.

Vos also wants to increase the amount people can give to political candidates, as well as institute changes within the Government Accountability Board, the state's elections agency. The GAB's decisions are currently made by six retired judges.

“I have always liked the model of using independent judges, so I don't see as big a problem with that,” said Vos. “My concern is the fact that the staff seems to become more of an advocate for their position, as to an independent clerk where they are in essence presenting the information for the GAB to decide.”

What exactly that might mean is still unclear. The GAB itself has typically spoken highly of the staff that runs the agency.

Outside of the realm of campaign finance, Vos said he wants to change Wisconsin's John Doe laws that prosecutors have used to investigate possible wrongdoing by associates of the governor. Other states use grand juries to handle similar investigations.

The Republican agenda for next year also includes several changes for the University of Wisconsin, according to Vos. He said that he wants to ensure that faculty spend more time teaching, and that research is geared toward helping the state's economy.

Vos and Joint Finance Committee Chairman John Nygren were asked whether they were open to a budget request by the UW that would increase funding for the System by $95 million dollars. Nygren called that a “tough sell,” saying he didn't think the state should make up for funding the System lost as part of a mandatory tuition freeze.

Vos said he was optimistic that an influx of new Republican state lawmakers will help the Legislature run more smoothly next year and help pass some of the caucus’s agenda. He often clashed with veteran Republican senators like Mike Ellis, blaming them for blocking conservative bills that passed in the Assembly.

Now, Ellis and others longtime senators are leaving, and more conservative lawmakers have been elected to replace them. Couple that with 18 new Republicans in the Assembly and a 63-seat majority, and Vos said next session could be different.

“That's a lot of new people with a lot of new ideas. Now the Senate has an easy job. They just take people out of the Assembly and say ‘Come to the Senate and show where we can make things better,’ and I think that's going to happen,” he said.

The idea of increasing the amount of money people can give to candidates that Vos outlined was already floated in a bill that died in the Legislature last year. Now that the makeup of next year's Legislature stands to be so different, its chance of passage may be improved.

Vos said there's been so much turnover in the Assembly that he's now one of its longest-serving members. He was first elected to the Assembly a decade ago.