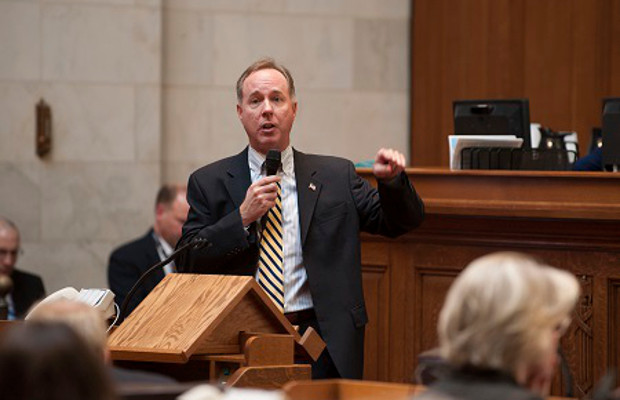 Vos Says On The Whole, He Sees Budget Proposal As 'A Good Place To Start'
By Scottie Lee Meyers
Share:

Republican Assembly Speaker Robin Vos said on Wednesday that Gov. Scott Walker’s budget proposal is “a good place to start,” but that he’s concerned about the magnitude of the funding cut to the University of Wisconsin System.

“In general, I think Governor Walker has put out a good budget,” Vos said. “Of course, we’re going to make changes to it just like the Legislature does every time. But, his focus on job creation, balancing the budget, ensuring that we invest in our priorities — that all seems like a good place to start for me.”

Walker's budget calls for a $300 million from the UW System while freezing tuition over the next two years. It also provides the system with more freedom from state oversight and laws.

Vos, a former member of the UW Board of Regents, said higher education drives the state economy.

“I worry that the magnitude of the cut might be too much to absorb this quickly,” Vos said.

While serving on the Board of Regents, Vos supported giving the UW System more autonomy. However, he said he’s concerned that Walker’s plan perhaps goes too far.

“There are some areas where I still think you need public oversight in a way that’s more meaningful than just having an authority,” Vos said.

Vos said he's specifically concerned that Walker's proposed "UW Authority" would get the power to make decisions about tuition.

In Tuesday night’s budget address before the Legislature, Walker didn't mention a controversial budget proposal to invest $220 million in bonding for a new Milwaukee Bucks arena. Vos said he likes the revenue streams Walker proposed to fund the project. However, he said there’s no way the plan would pass without having a significant local buy-in, and that it’s imperative that the team stays in Wisconsin.

“Just like we have asked the taxpayers where I live in Racine County and those who live in Brown County to pay for the Brewers’ stadium and Lambeau Field, I certainly think we need to ask the people who live in Milwaukee, the city and the county, to pony up their share, because they're going to get the largest benefit from the economic development,” Vos said.

Transportation funding seems to be a potential area for bipartisan cooperation, with leaders from both sides of the aisle acknowledging that the state needs to find a way to create long-term funding for roadway projects.

“If the answer is to look for ways to solve the transportation fund, I’ll definitely work with anybody who wants to reach out and work with me,” Vos said.

As expected, state Democrats have been much more critical of Walker’s agenda. Democratic Rep. Chris Taylor said on Wednesday that because of Walker’s “bad choices,” Wisconsin faces a deficit of $2.2 billion at a time when many other states have budget surpluses and are making investments.

“Wisconsin needs a budget that actually restores economic opportunities for Wisconsin families, that creates the jobs for the future, that gives Wisconsin families a raise, and gives our children a chance to succeed. And the Walker budget fails to do these things,” Taylor said.

It should be noted that the $2.2 billion figure that Taylor used is an old figure that was based on budget requests from state agencies. Now that the executive budget has been released, the Legislative Fiscal Bureau will likely release an updated projection soon.