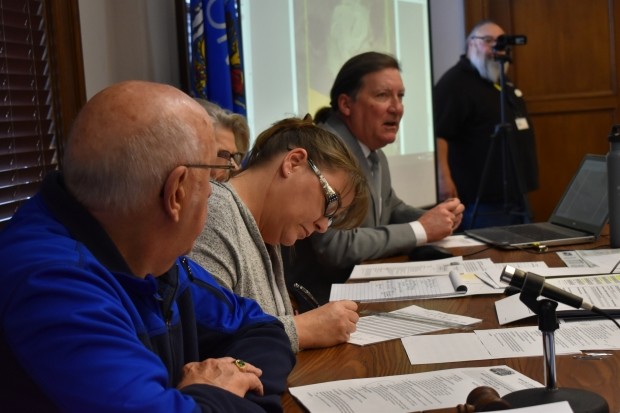 Ashland County’s finance committee approved a recommendation by the county’s financial consultants to close two of four separate bank accounts that totaled more than $150,000 in revenues. The county hired accounting and consulting firm MWK, LLC last year to conduct the audit as officials tackle long-running financial struggles. The Ashland County board is set to vote on closing the accounts at its next meeting Tuesday, March 22.

Mike Konecny, the firm’s managing member, recommended transferring more than $105,000 in two accounts to the county’s general bank account during the committee’s March 8 meeting. The accounts included revenues generated from inmates through products sold at the jail’s canteen, charges for phone use and electronic monitoring.

"Some of those balances (are) probably from some unknown determination why it was there," said Konecny. "It has been there for years."

The discovery comes at a time when law enforcement budgets have faced more scrutiny amid calls from some activists to defund police and attempts to require more accountability.

Ashland County Sheriff Mick Brennan maintained all revenues stemmed from canteen sales, including the largest account totaling more than $98,000. He said oversight of those funds rested with former jail administrator Lt. Tony Jones, who was investigated last year for failure to deposit tens of thousands of dollars.

"We closed that account and opened up a new one because of the financial discrepancies," said Brennan.

The Ashland Daily Press previously reported that a probe found evidence of financial mismanagement by Jones, who died during an investigation by the Douglas County Sheriff’s Department. A Douglas County detective said no evidence existed to support theft charges and concluded around $41,000 in missing funds were unlikely to be found.

During the meeting, Brennan said his office opened a new account to deposit inmate revenues that totaled more than $51,000 as of late December. Another account with roughly $7,200 was left open to pay for "any other bills ... that were unpaid" in the past. The department also has a savings account with a balance less than $100.

Brennan didn’t oppose the consultant’s recommendation. Even so, he objected to any additional approvals that may be required to use those funds, limiting immediate access.

"I don't want to have to go to the county board and say, 'I need to have this,' and it's going to take one or two or three or how many months it’s going to take for us to get the answer when (inmates) need it right now," said Brennan.

Under the consultant’s recommendation, the county would create a restricted account to set aside revenues from canteen sales that would support an inmate wellness program.

"This way, the money will be accounted for in our auditing process every year," said Ashland County Administrator Dan Grady.

That recommendation received support from Brennan and Ashland County board members. Even so, board member Pat Kinney stressed the importance of county oversight.

"When we don't know what's going on and where and how this money is being used, then ... I personally feel like I'm failing in part of my responsibilities as far as the oversight," said Kinney.

The separate accounts came as a surprise to board member Philomena Kebec. In an interview with WPR, Kebec said oversight is necessary to ensure there’s no overspending and that funds benefit the public and those incarcerated.

"None of that has happened," said Kebec.

In an interview with WPR, Brennan said his office is being as transparent as possible. He said the accounts were opened up roughly 20 years ago, and Brennan insisted there has been no mismanagement of funds.

"There was no misappropriation. There was no funds that were missing or stolen or anything like that in the past and that's why (those) funds are there now," said Brennan.

According to the Daily Press, the county’s insurance company approved a claim filed last fall to recover roughly $38,000 to make up for missing jail funds.

Brennan said there was an "oversight" on behalf of the jail administrator, adding steps have been taken to improve accountability. He said multiple people now oversee inmate revenues and money collected from jail bonds. While timely deposits haven’t occurred in the past, he said staff now make weekly deposits.

Going forward, Kebec said she hopes no other separate accounts are unearthed.

Under a resolution that will be taken up by the board, the county treasurer will reach out to financial institutions in the region to ensure no unauthorized accounts exist. If approved, the treasurer would close any such accounts as directed by the county administrator or finance committee.

The county’s administrator said the two remaining accounts overseen by the sheriff’s office will remain open for temporary revenue collection, and balances will be transferred monthly to the county’s general bank account.