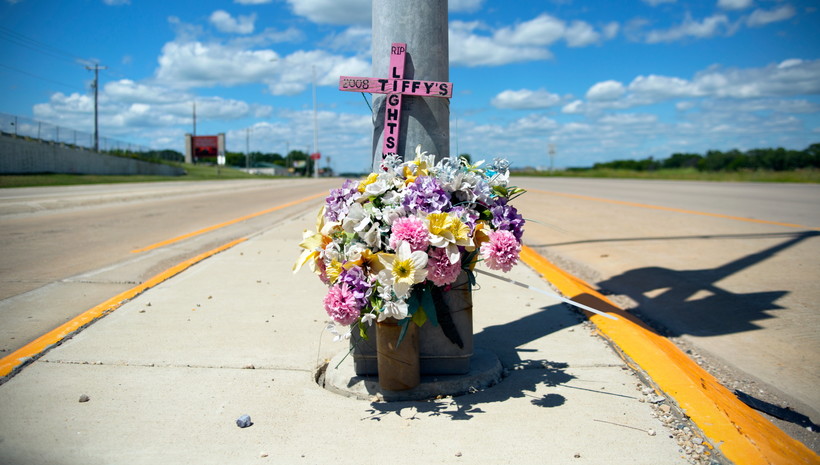 This memorial is at Highway 51 and Hoepker Road in Madison in memory of Tiffany M. Dutcher. Photo courtesy of Thomas Ferrella.

Memorial Of Former Patient Was Catalyst For Project
By Elizabeth Dohms-Harter
Share:

Thomas Ferrella watched as a roadside memorial was erected for two Madison high school girls who died while crossing the street.

At the intersection of East Washington Avenue and 4th Street were plastic flowers on the city's east side, hand-written messages and balloons that caught the eye of Ferrella each day as he commuted to work. He was an emergency medicine physician and had cared for one of the girls who passed away.

Ferrella said he regretted never photographing the site before the flowers, stuffed animals and personal messages were gone.

But that was in 1991, and since then, multimedia artist Ferrella has been photographing roadside memorials in Wisconsin and Chicago, and has shared those pictures and the locations of the memorials in "Not Forgotten: Wisconsin Roadside Memorials," a web-based photo essay of more than 80 photographed sites.

"Being an emergency physician, I'm used to being in control," said Ferrella, who retired in 2013. "But this project has taken me out of that, even though it's trauma-related. Now, I"m seeing grief very personally in their home territory, so to speak."

Ferrella refers to the sites as a form of folk art, noting that they're creations borne out of reflections and memories -- whether that's a half-smoke cigarette of the victim's preferred brand, a sample of their favorite beverage or personal trinkets such as McDonald's Happy Meal toys. "(Loved ones) are building these things based on a very deep sense of grief, and because of that they become very personal," he said. "There's no overlying architect deciding what goes where. Nobody's coordinating colors; it's all extremely personal."

Ferrella estimates that 10 to 15 percent of the sites relate to deaths caused by homicides. Still, he said the majority are traffic crashes often involving pedestrians or bicyclists.

Most of the memorials that he finds serendipitously, he said. He is also tipped off by police officers aware of the project, as well as family members of loved ones lost.

"For me, the power comes from stopping, looking and being up close and personal," he said. "There's meaning when you really take a look, like the half-smoked cigarette or a particular figurine or a basketball."

He tries to connect with the families and friends who created the memorials.To this end, he was more successful in the Chicago area than in Wisconsin, where memorials can be tougher to track down because they're in isolated and rural settings, he said.

While some memorials won't last, others have spanned decades, Ferrella said. The oldest memorial he's photographed for the project is near Plain. It's for three high school students who died in a car accident in the early 1960s, he said.

Ferrella is interested in roadside memorials for the way they seem to empower people through their grief, he said. It's a recognized and accepted gesture outside of the confines of the rules that dictate processes before and after death in the hospital, funeral home and cemetery.