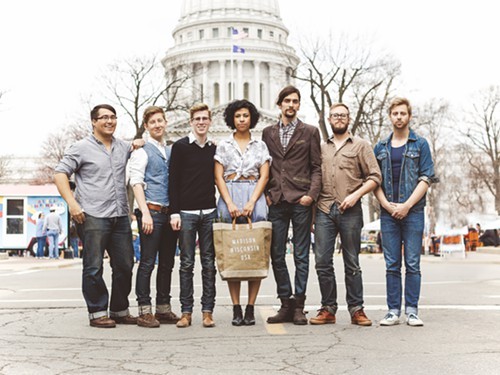 NPR is offering a preview stream of Phox's debut self-titled album, which is due to arrive in stores next week. The septet, from Baraboos, Wis., has been garnering major press in recent months and two Madison shows in early August have already sold out (a Milwaukee date a day earlier still has tickets available). The band was also profiled last week in a story published in the Isthmus, the alternative weekly newspaper in Madison. (Read the report and the profile.)

British EMD producer James Blake is apparently collaborating with Bon Iver leader Justin Vernon again, as well as Kanye West, on a new album, according to a video posted on Billboard magazine's website. Vernon and Blake previously teamed up for the song "Fall Creek Boys Choir," on Blake's "Enough Thunder" EP in 2011. Meanwhile, Vernon and West previously teamed up several times on various Kanye projects, including "My Beautiful Dark Twisted Fantasy," "Watch The Throne" (a duo album with Jay-Z) and "Yeezus." (Read the report)

Garbage singer Shirley Manson will appear in a segment of "Pancake Mountain," a children's television show, that will appear online via PBS Digital Studios' YouTube channel, according to Rolling Stone magazine. Manson apparently "sing-raps" a lesson all about Germany, including discussing the Autobahn, lederhosen and Krautrock legends like Can and Neu! In the past, Arcade Fire and the White Stripes have performed on the program and the article notes that Distllers' Brody Dalle wrote a new theme song and the Jesus Lizards' David Yow will appear in a recurring cooking segment. (Read the report)

Famed producer Rick Rubin has told NME that he is helping Kanye West on his next album. Rubin, an former record label mogul and a musical sounding board for such acts as the Red Hot Chili Peppers, Slayer and Johnny Cash, helped West complete last year's "Yeezus." As the article states, A Tribe Called Quest leader Q-Tip is also assisting West with the record. (Read the report)

British rock stars Pete Doherty and Carl Barât are saying reunion plans for the Libertines have extended beyond one date and now include a full tour. A new record may also be in the cards. (Read the report)