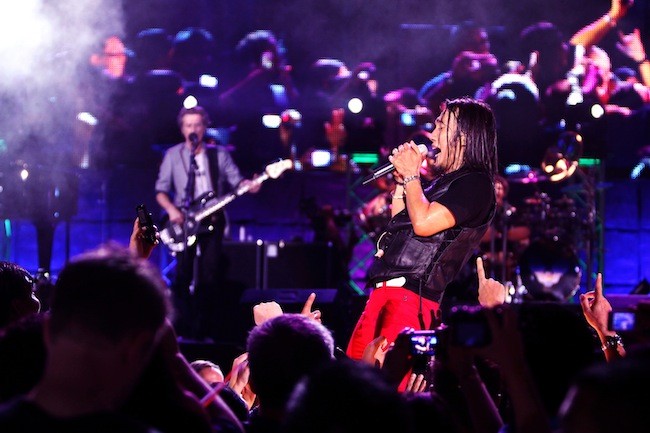 PBS' "Independent Lens" series has released a great new documentary about '80s arena veterans Journey and their new Filipino singer. While it's heart-warming to see and hear the story of Arnel Pineda, who was plucked from obscurity in the Philippines after being discovered by the band singing on YouTube, the film has a darker side as well. First, there's Pineda's uncanny ability to duplicate former Journey singer Steve Perry's singing exactly, which the band members essentially concede is the reason Pineda got the gig in the first place. Second, there's the unshakeable sense that the band members hold much of the power in the situation. Through their choice of words during interviews or glimpses offered during behind-the-scenes rehearsals, it's clear Pineda is sometimes viewed as a kind of puppet. (Read the report)

CNN.com reports about the controversy surrounding New Zealand teen pop star Lorde's debut single. The song, "Royals," includes lyrics that admonish some of the living-the-high-life clichés sometimes found in contemporary pop, R&B and hip-hop. Because of this, the track has been called "racist" by some critics. (Read the report)

I'm a little late on this but three weeks ago, VH1.com recently compiled a Buzz Feed-esque list of the 20 "awesome" Beatles recordings that haven't been released. The compilation ranges from the Quarrymen, the pre-Beatles skiffle band that John Lennon and Paul McCartney first formed together, through to the Lennon demos that the remaining Beatles worked up for the "Anthology" series in the mid-'90s. (Read the report)

The Los Angeles Times has a review of a new, more detailed biography of '90s singer-songwriter Elliott Smith. The book traces Smith's early life in Texas through to his underground-punk years in Portland, Ore., through his years of '90s success, all the way to his 2003 suicide. (Read the report)

Broken Bells, the side project featuring the Shins frontman James Mercer and producer Danger Mouse, has apparently reactivated after a couple of year of hibernation. The duo has recorded a new album and to tease it, they have released a 1-minute clip of a new song. Mercer's high falsetto recalls the Bee Gees' '70s disco era. (Read the report)

Comedian Marc Maron has been doing a podcast interview series online for four years. The program, called "WTF," focuses on conversations between Maron and various B-list celebrities, underground musicians and the like, about twice a week. A recent chat with the Meat Puppets' Curt Kirkwood was very revealing in terms of the scope of Kirkwood's interests and his eclectic knowledge in music. Warning: There's sometimes some salty language in the interview. (Read the report)