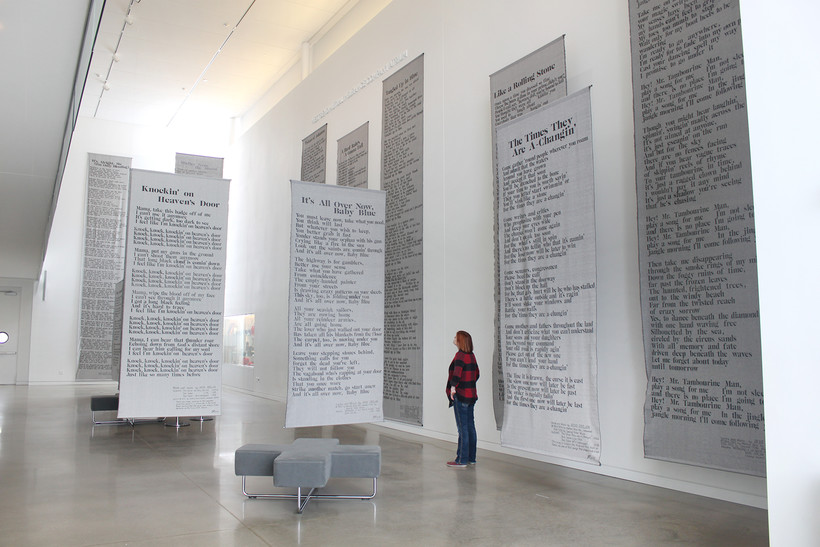 Giant, hand-stenciled scrolls of Bob Dylan song lyrics are on display at the Museum of Wisconsin Art in West Bend. Door County artist, Skye, has been working on this text-based textile art for nearly a decade creating 44 song panels in all.

The new exhibit, "Shakespeare's in the Alley: A Tribute to Bob Dylan," will feature 18 popular Dylan songs. The panels – some 27 feet long – hang throughout the museum’s atrium, said associate curator Erika Petterson.

"They are awe-inspiring when you see how large they are, and you can be surrounded by the words and read the words," Petterson said.

Petterson wants exhibit-goers to see and appreciate Dylan’s literary prowess that may not be fully recognized when listening to his music.

"You hear his songs and recognize them so readily on the radio. It’s an auditory format," Petterson said. "Once you can move around them and read them, you can experience them as poetry and get a full understanding of his writing."

Dylan received the 2016 Nobel Prize for Literature. In a written acceptance speech he provided to the Nobel committee, he said that it’s his songs that are the "vital center" for what he does.

"They seemed to have found a place in the lives of many people throughout many different cultures and I'm grateful for that," he wrote in the December speech.

The tribute exhibit to Dylan's lyrics will be on display until March 5 at the Museum of Wisconsin Art, 205 Veterans Ave, West Bend. Saturday’s opening reception will include a musician playing Bob Dylan covers from 2 to 5 p.m. An open mic night for Dylan-inspired singer/songwriters is set for 7 p.m. Thursday, Feb. 23.