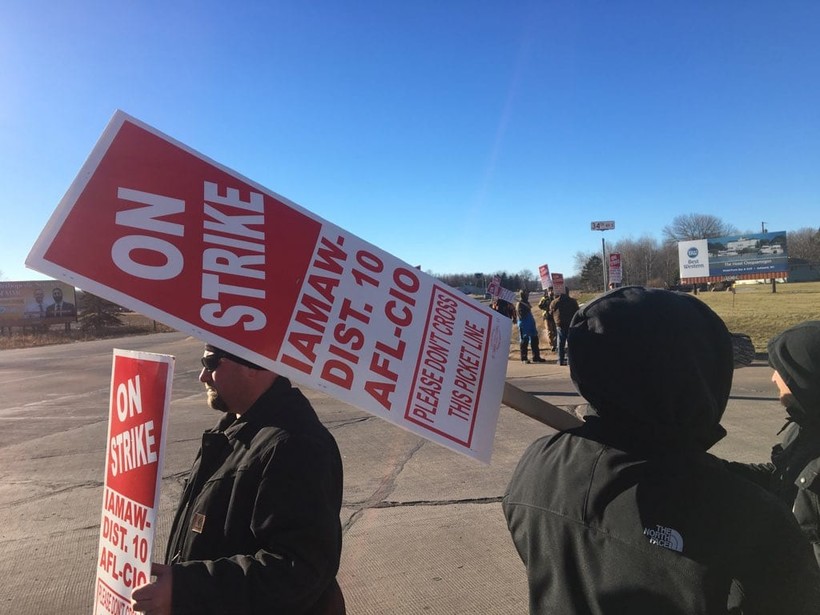 Workers strike outside the entrance to C.G. Bretting Manufacturing Company in Ashland on Monday, Dec. 17, 2018.
Photo courtesy of KBJR-TV

Around 200 Workers On Strike At Northern Wisconsin Manufacturing Company

Around 200 union workers are on strike for the third day since contract negotiations failed with a northern Wisconsin manufacturing company. The strike began just after midnight on Saturday, Dec. 15, 2018, because the union wants to see better wages, pension and health care benefits for its members.

Union members with Local 621 of the International Association of Machinists and Aerospace Workers, or IAMAW, say they turned down a contract offered by C.G. Bretting Manufacturing Co., Inc. in Ashland last Thursday because it didn't give workers enough to make a decent living, according to Todd Humleker, a Wisconsin business representative with District 10 of IAMAW.

Speaking by phone from the picket line, Humleker said the company has shown no interest in continuing negotiations with workers.

"The fact that they’re having to be out here instead of making products for Bretting Manufacturing," said Humleker. "Strikes don’t help anybody, but we need to be able to get back to the table and come to an agreement so everybody can get back to work."

Humleker said Tuesday morning that the union hasn't spoken with the company since Sunday.

In a statement obtained by KBJR-TV, the company said it was "hard to understand why the union would choose to begin a job action in the face of a contract offer that would provide substantial increases in wages and would preserve benefits and to do so in the midst of the holiday season."

The company said take-home pay has increased more than health care premiums over the past four years. Bretting said it was offering wage increases ranging from 2.5 to 3 percent in each year of a three-year contract that would run through 2021.

He said the union hasn't gone on strike at Bretting since the 1970s. Bretting employs around 400 workers and makes machines for the paper industry.

Humleker said workers are willing to stay on strike until the union reaches an agreement with the company.