The issue of police reform is a point of contention in the race for state representative in Wisconsin's 30th Assembly District, which is just a half-hour drive over the state line from the intersection in Minneapolis where an officer killed George Floyd in May.

Incumbent state Rep. Shannon Zimmerman, R-River Falls, an entrepreneur and business owner, is seeking his third term in the Assembly. He is being challenged by Democrat Sarah Yacoub, a Hudson attorney who formerly worked for the Los Angeles County District Attorney’s Office. The district includes parts of St. Croix and Pierce counties and lies entirely within the Twin Cities Metropolitan Area.

Yacoub and Zimmerman sparred during a Sept. 4 debate on Wisconsin Public Radio’s program "The West Side," moderated by WPR’s Dean Kallenbach.

Dean Kallenbach: Gov. Tony Evers called a special session of the Legislature to consider bills dealing with police reform.  Republican lawmakers who hold the majority in both the Assembly and the Senate immediately recessed that session rather than take up any legislation, with leaders instead suggesting formation of a task force.  How should the state deal with police reform?

Shannon Zimmerman: It is an important subject. It is also crucial that we get it right and not just get it fast. When you think about just the influences on some of the things that we have seen, in certain cases it could be as described, maybe a bad law enforcement representative. In other cases, it could be racially influenced. It could relate to poverty. Law enforcement is doing their part locally, but I think it's important to follow the recommendation of the (Assembly) speaker, get the task force put together, let's get everybody in the room, and devise some legislation that actually makes sense and solve part of these issues.

Sarah Yacoub: In the words of Joe Biden, this is malarkey. My opponent has not participated in any community conversations with any Black Lives Matter groups or anybody affected by police misconduct. When you hear "task force," that is Republican-speak for "kick the can down the road," and we can't afford to do that right now. We have the research. We have the data. There's absolutely no excuse for their failure to go to work.

DK: What policies would you support as a legislator to improve access affordability and quality of health care in Wisconsin?

SY: Right now, we have $1 billion of federal relief funds that would give access to tens of thousands of Wisconsinites. We are in the middle of a pandemic. We need our neighbors to have access to health care to get through this. You can't really say you support law enforcement when you reject $1 billion in federal Medicaid expansion funds. What that does is deny mental health care access to tens of thousands of Wisconsinites. What happens then is that people who suffer from mental health (problems) don't get the resources they need and, too often, so sadly, they end up intersecting with the criminal justice system: a system that was never designed to handle mental health care ... and that falls squarely on the shoulders of our law enforcement to try to handle.

SZ: If you're a human being, you care about health care. You care about your family. You care about your kids. I think that the philosophical difference lies in, "OK, so how do we do this?" We have to increase and enhance transparency. We have to, rather than the answer being simply (to) spend more money, we have to also look at the expense side and reducing the expense side of what is a very complex, very bloated overall system, right? And so, when we talk about taking the free money from the federal government, I don't believe in throwing more good money at this issue. Look, this past budget we sent another $150 million in caregiver wages. We increased that. I remember in the Joint Finance (Committee) the morning of, before we went into committee, talking with our local nursing centers as we worked to send a $74 million increase to them. They are taking care of mom and dad, grandma and grandpa, so health care is a priority.

DK: What changes would you like to see improve the business climate here in western Wisconsin?

SZ: Less government. Government rarely, if ever, does anything efficient and the businesses that I have seen be successful are when you let entrepreneurs do what they are best at. And the way that we do that is by making sure that we are not implementing greater tax burdens on them. And when you do that with companies, they are able to reinvest into their own businesses, into adding staff, adding new services, new products, and so forth.

SY: Well we can undo the damage of Gov. Scott Walker, a line that is towed by my opponent. Act 10 did so much to destroy labor in Wisconsin and to incentivize young families moving out of state where they can get paid the value of their work. It’s interesting to hear my opponent with his business experience say these things. It is not smart business for most companies to have to expand into rural broadband, and yet we need broadband to start businesses, for farmers to get their work done, for first responders to be able to connect with the various entities that they communicate with when responding to an emergency. We need a representative who understands the needs of working families and who will go to bat on these issues.

DK: What challenges and opportunities does your proximity to the Twin Cities provide for a legislator representing your district?

SZ: I'm running into a lot a new people in the district moving over from Minnesota. River Falls (is) at minimum 300 single family homes short compared to demand right now. Those are opportunities for our local builders, our local electricians, plumbers, etc. For me personally, my pitch is that I've coached, I've raised kids, I've started businesses, I still have businesses, I'm active in a variety of ways in this community, and that's the type of representative it's going to take for such a dynamic high-growth area in the state of Wisconsin.

SY: Were not seeing votes on the issues that affect Wisconsinites the most because the Republicans aren't interested in bringing them to a vote. In terms of the good news of being a Twin Cities suburb, it’s that we're getting people from other places in the country … who understand what competent government looks like and who are accustomed to a higher bar of public service. He's talking about how he wants fairness, but his party leadership is unapologetically seeking a supermajority in the Legislature, and they're spending lots of money on my opponent's race to secure that. What that means is that one party will have the opportunity to overturn our governor's veto. They already treat their legislative colleagues on the other side of the aisle as irrelevant when it's convenient and now they're going to seek to treat the entire executive branch as irrelevant and that is not balanced. That is not good government. 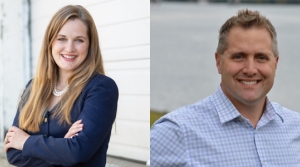 Assembly Candidates Debate- The candidates seeking to represent Wisconsin’s 30th District in the State Assembly debate on “The West Side.”