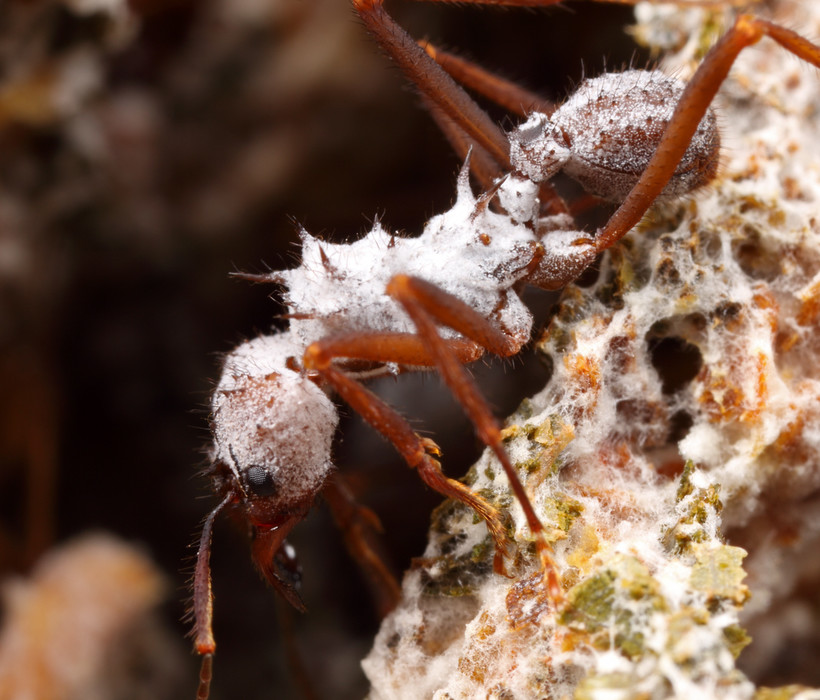 A fungus-farming ant is covered in white symbiotic bacteria, which the ant relies on to produce antibiotics to protect its garden from a parasitic fungus. Photo by Alex Wild

Ants Evolved With Bacteria To Protect Their Farms From Pathogen, Research Shows

Protecting crops from pests isn't just a human problem. It turns out ancient ants dealt with it, too.

Cultivators of fungus gardens, farming ants had a problem with a type of pathogen that consumed the fungus the ants were culturing, said Cameron Currie, the Ira L. Baldwin professor of bacteriology at the University of Wisconsin-Madison and one of the lead researchers on a project studying the phenomenon.

A rapid grower, the pathogen — which in this case is another fungus — had the capacity to devastate the garden ants relied on for their food. So, they evolved, according to research published by UW-Madison.

Responding to the potential disaster, ants used a different kind of bacteria to produce antibiotics that protected their fungus gardens.

Ants even helped the bacteria grow. The exoskeleton of ants evolved to developed cavities where the bacteria could develop, a change that occurred three different times throughout their evolution.

"If you're a researcher on ants, these changes are incredibly elaborate and fascinating," Currie said.

Researchers studied fossilized ants, some of which were from the Dominican Republic, that had been trapped in amber an estimated 15 to 20 million years ago. Also embedded in the amber was evidence of the bacteria that helped the ants protect their farms: Actinobacteria. An ant is trapped in amber. Bubbles on its body are probably from bacteria that the ant feeds and is capable of producing antibiotics that protect the ant's fungus farm. Photo: Courtesy of Hongjie Li.

Currie said scientists knew about the antibiotic-producing bacteria for about 20 years, but this study proves the relationship between the bacteria and ants goes back much further than previously thought.

The researchers estimate this type of fungus gardening took place about 50 to 65 million years ago by the ancestors to more than 250 species of ants, Currie said.

The ants' structural changes show that they were using the bacteria for tens of millions of years.

"There's multiple origins of the structures that maintain (the bacteria) across the evolutionary history of the association, and that indicates that there is a strong selection on the ants to protect their bacterial symbiont," he said.

That protection extends beyond just giving the bacteria a place to grow, Currie said. Inside the ant were gland cells connected to the bacteria pockets through which the ants actually fed the bacteria.

"The nutrients for the bacteria are derived from the ants," he said. "So it's really ants cultivating and culturing bacteria on and in their bodies to produce these antibiotics."

Ants and their microbe partners can serve as a system for understanding how the relationships change between hosts and microbes, for example, how healthy bacteria and humans co-exist, Currie said.

Additionally, Currie said through the research, new compounds have been discovered that have antimicrobial properties, which could potentially be developed into products or drugs to kill or stop the growth of microorganisms.