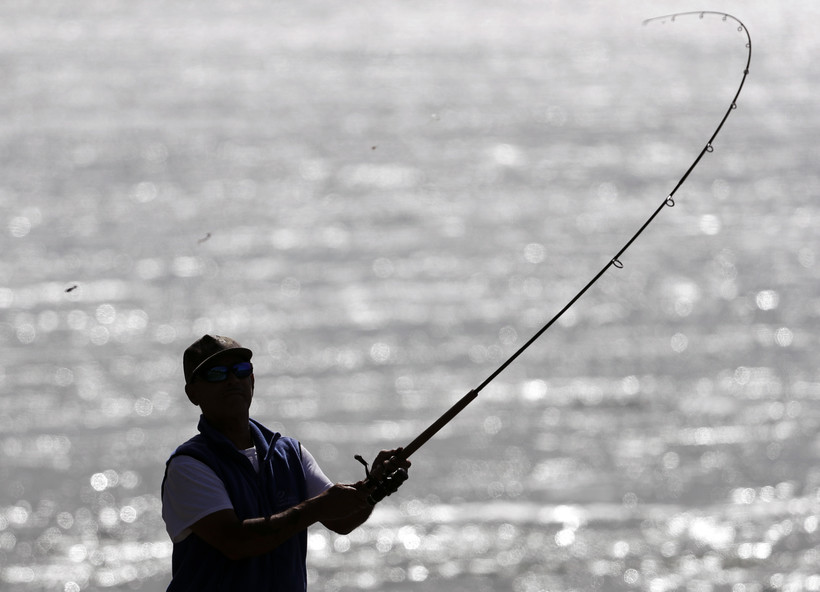 Louie Rosalio casts a line while fishing on the Niagara River on Wednesday, Sept. 14, 2016, in Buffalo, N.Y. AP Photo/Mike Groll

The use of antidepressants among Americans has soared in recent years. Those medications are ending up in the Great Lakes, absorbed into the brains of fish, according to a new study from the University at Buffalo in New York.

"They’re mainly coming from effluents from wastewater treatment plants, and those are basically coming from our own homes," explains Diana Aga, lead scientist on the study.

The study looked at the brain tissue of smallmouth bass, largemouth bass, rudd, rock bass, white bass, white perch, walleye, bowfin, steelhead and yellow perch in the Niagara River, which connects two Great Lakes: Lake Erie and Lake Ontario. More than half of the samples "had norsertraline levels of 100 nanograms per gram or higher," according to a news release.

Norsertraline is a derivative of an active ingredient in popular antidepressants like Zoloft and Lustral.

Some of the pollution may come from the mismanagement of old pills, often flushed down the toilet, entering the waterways, she said. Increasingly, local drug "take back" programs have popped up across communities to reduce pollution through improper disposal of prescription medicines.

But according to Aga, much of the pollution also comes from human waste, such as urine, which makes its way into wastewater treatment plants and then into United States waterways.

Though sewage is treated before entering these waterways, current wastewater treatment systems do not remove antidepressants, Aga said.

"The main purpose of wastewater treatment plants is really to remove nitrogen," she said. "The system is designed to do that, but not to remove pharmaceuticals and other organic pollutants. And that includes antidepressants."

Aga said the university began the study looking for several types of pharmaceuticals in the water. But they found that the antidepressant levels were alarmingly high.

Bioaccumulation of antidepressants in the brain tissue of 10 different fish species were even higher than the antidepressant levels in the water — almost 20 times higher, Aga said.

The good news: this accumulation doesn't seem to be immediately dangerous for humans, Aga said. That’s because most humans don’t eat the head or brain of fish.

What is concerning, Aga said, is that these levels could affect the brain function of the fish — the way it swims, feeds and captures prey. There’s even evidence that it can cause fish to swim towards light, making them more susceptible to predators, she said.

However, technology already exists to remove pharmaceuticals from wastewater. The catch is that those treatment systems can be significantly expensive, costing millions to install.

Improving wastewater treatment plants would also reduce the amount of antibiotics in the water, another concern.

"The problem of antibiotics is the development of drug resistance," Aga said. "The low levels of antibiotics in water is the perfect condition to create resistant pathogens. So that’s been a big concern in my research lab."

"As we see more and more of these pharmaceuticals in the environment, and finding more and more effects, I think there will be some good drivers to renovate and improve wastewater treatment plants, especially those that are aging," she said.