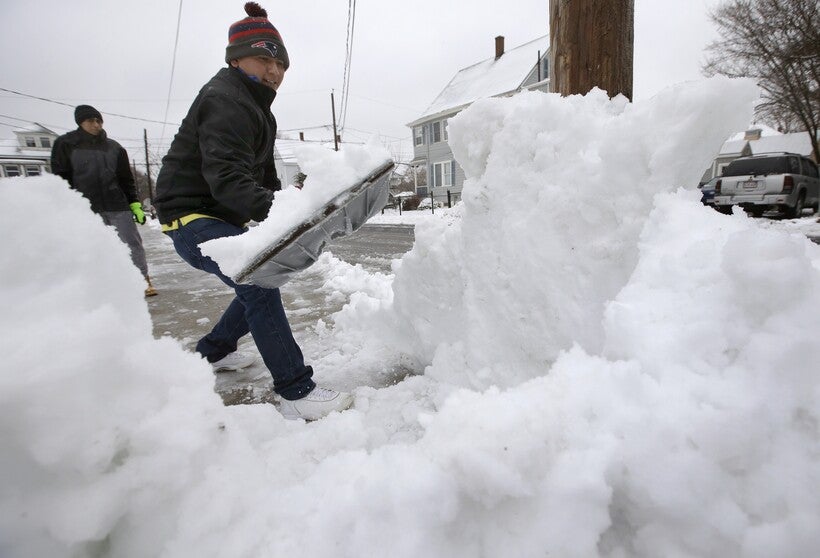 Miguel Delao, of Norwood, Mass., front, shovels snow in front of his home, Sunday, Jan. 20, 2019, in Norwood. A major winter storm that blanketed most of the Midwest with snow earlier in the weekend barreled toward New England Sunday, where it was expected to cause transportation havoc ranging from slick and clogged roads to hundreds of canceled airline flights. Steven Senne/AP Photo

Another Mid-Week Snowstorm Headed For Wisconsin

Snow is back in the forecast for Wisconsin on Wednesday.

Western, central and northern parts of the state could see 6 to 9 inches of accumulation in all, with lesser amounts expected elsewhere.

"The snow will be moving into the southwestern half of Wisconsin during the morning hours," Mamrosh said. "So people driving to work or school in La Crosse, Madison, Janesville areas and maybe even Milwaukee, will have to drive through some snow."

"The snow won’t arrive further to the northeast — say, in Rhinelander, Green Bay, Sturgeon Bay — until closer to mid-morning. In those areas, you'd have a tough commute home," he said.

A Winter Weather Advisory is in effect from early Wednesday morning through the day for several inches of snow and minor ice accumulation. #swiwx pic.twitter.com/vr9ammOqyX

Mamrosh said unlike several other recent storms, this one isn't likely to make roads icy.

"There may be some freezing drizzle or some very light freezing rain as the snow ends, but that will probably be of little consequence because it's already falling on snow," he said.

The storm should wrap up by Thursday morning, but a stronger system is set to move through the state on Sunday.