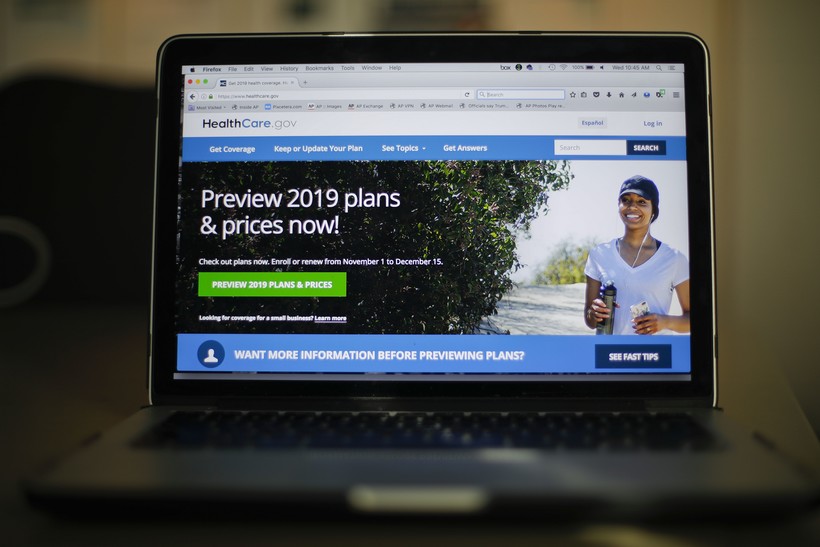 The HealthCare.gov website is photographed in Washington, Wednesday, Oct. 31, 2018. Sign-up season for the Affordable Care Act’s subsidized health insurance starts Thursday, and for a change the outlook for the program is stable. Pablo Martinez Monsivais/AP Photo

Nov. 1 marks the beginning of a shortened sign up period for those seeking health coverage through the Affordable Care Act marketplace.

Not only is enrollment shorter, but there won’t be a penalty for not buying health insurance — a change that takes effect next year. It’s arguably one of the biggest changes in the law, along with more availability of short term plans, which are usually cheaper.

"The insurance doesn’t cover as much but it's another option out there," said Tom Mauthe, a health insurance advisor in Hartland, in regards to short term plans.

Insurance brokers may have a more prominent role this year because President Donald Trump has cut funding for navigators — people who get federal money to help customers sign up for health coverage.

Wisconsin is down to one navigator group which is contracting with another agency to provide in-person assistance to 23 of the state's 72 counties.

Now in its sixth signup season, the ACA so far has withstood efforts by Republicans to undermine it. But it’s still being challenged in court by 20 states, including Wisconsin. Democrats like Milwaukee Mayor Tom Barrett continue to champion the legislation.

"I know that the protections provided by the Affordable Care Act make a real difference in people’s lives," said Barrett at a press event Thursday in Milwaukee. "No one can be denied for pre-existing conditions, and coverage includes access to prenatal care, mental health services and help managing chronic illnesses."

Under the ACA, Barrett said there has been a 42 percent reduction in Milwaukee County's uninsured rate. Of the remaining 68,000 uninsured individuals, the great majority are eligible for BadgerCare coverage or for financial assistance in the Health Insurance Marketplace.

Over the years, insurers have come and gone in Wisconsin’s federally-run marketplace. This year there will be more counties with at least two insurance companies to choose from, according to a map put out by Wisconsin’s Office of the Commissioner of Insurance.

"For most individuals who qualify for the tax credit, they aren’t going to see a lot of change. The plans change a little bit and dynamics change. There may be a higher deductible, may be different copays that sort of thing. But they’re still going to see similar premiums compared to previous years," said advisor Mauthe, who works at Aegis Wealth Advisors, LLC.

The individuals that are taking a financial hit, he said, are people who don’t qualify for the tax credit. They’re the ones looking for options outside the marketplace.

Premiums nationally are expected to go down a bit this year after double digit increases. In Wisconsin, prices are being kept in check through Gov. Scott Walker’s reinsurance plan, which uses federal money to subsidize high cost medical claims.

"It’s estimated that its going to lower the premiums 3.5 to 5 percent, in that range. At least that’s what they’re saying. I have seen a little bit of that. We just got rates for most of carriers in Wisconsin and I’m seeing some rates go down a little bit for some of the people that qualify for the tax credits. However I’m also seeing the deductibles go up," Mauthe said.