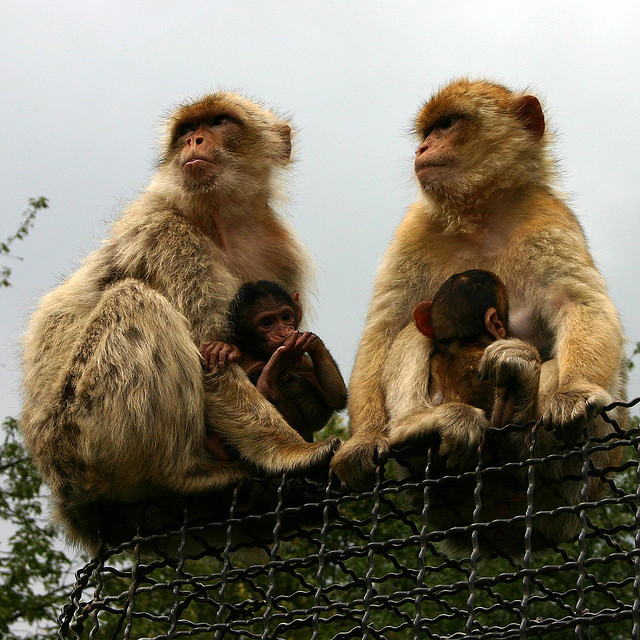 The research will be conducted on baby rhesus monkeys. Photo: Jason (CC-BY-ND).

A national animal rights group is suing the University of Wisconsin Board of Regents, demanding that it release handwritten notes taken during meetings about controversial anxiety research with baby monkeys.

The Animal Legal Defense Fund, a national nonprofit, says the UW failed to release all the records from the federally mandated meetings that in which the controversial animal research was approved.

The project involves separating 20 newborn monkeys from their mothers.

Kelsey Eberly, an attorney for the the ALDF, said the UW has already released minutes for the meetings, but that they're very sparse. Eberly said that getting handwritten notes from the official meeting recorder and participants is key to getting a full picture of the discussions.

“That's the only way we're going to find out whether the university did its due diligence as the Animal Welfare Act requires, and really asked the hard questions that it should have been asking about this research,” said Eberly.

In response to the months of controversy surrounding the study, the university hosted a discussion on animal research ethics earlier this month. At that discussion, Eric Sandgren, director of UW-Madison’s Research Animal Resources Center, said the potential long-term benefit of the study — producing anxiety-treating drugs for millions of humans — outweighs the concerns about animal treatment.

“Considering the magnitude of the problem that we're dealing with here, I believe it would be unethical not to go forward with this study,” said Sandgren. “If you don't do the study, then you lose the possibility of gaining those particular benefits"

A UW-Madison spokesperson said the university “takes its responsibilities under Wisconsin’s open records laws seriously.” The university wouldn't comment further, since the lawsuit is ongoing.