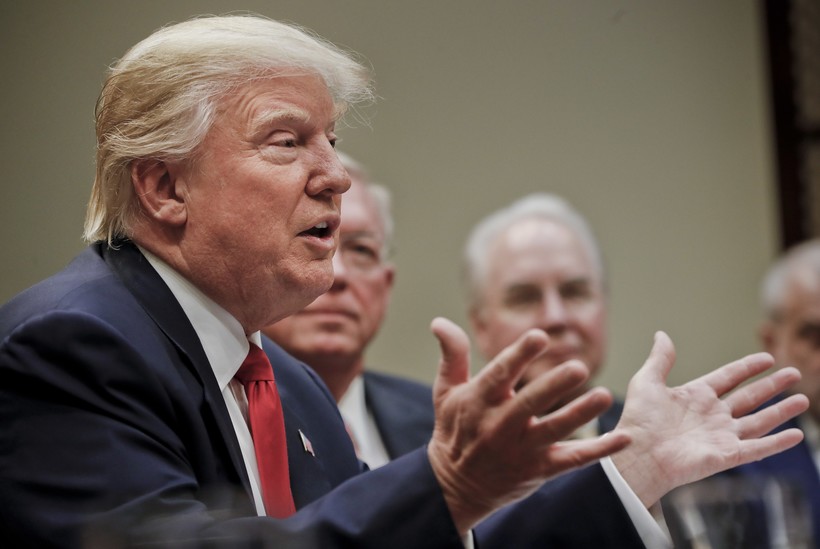 President Donald Trump speaks during his meeting with health insurance company executives in the Roosevelt Room of the White House in Washington, Monday, Feb. 27, 2017.

Analyst: Trump May Not Be Able To Win On Health Care

President Donald Trump made a recent promise to health insurance CEOs that his plan for health care would be a winner.

"We have a plan that's going to be fantastic," he told executives last week. "A very competitive plan, costs will come down, health care will go up very substantially. People will like it a lot."

However, Trump may have a hard time closing the deal, said Kevin Hardwick, an associate professor of political science at Canisius College in Buffalo, New York and a Republican Erie County legislator.

On Monday, House Republicans unveiled their plan to replace the Affordable Care Act, also known as Obamacare. Under the proposal, penalties for people who do not buy health insurance would be scrapped, the amount that individuals can contribute to health savings accounts would be expanded and subsidies for those with modest incomes would be eliminated.

In addition, the measure would keep current Obamacare provisions, including allowing children to stay on their parents’ insurance plans until age 26 and banning insurers from denying coverage to those with pre-existing conditions.

Trump tweeted his support of the proposal Tuesday, calling it "our wonderful new Healthcare Bill."

Our wonderful new Healthcare Bill is now out for review and negotiation. ObamaCare is a complete and total disaster - is imploding fast!

However, hard-line conservatives who have vowed to fully repeal Obamacare, have argued the House plan, dubbed the American Health Care Act, doesn't go far enough in rolling back current law. Other Republicans have raised concerns the proposal does not protect people in Medicaid expansion programs.

"This is just the start," Hardwick said, noting that Republicans have run for years on a repeal-and-replace approach to health care. But making a general plea for Obamacare’s repeal and a vague call for a much better alternative is far easier than hashing out specific replacement components, he said.

Trump may wind up learning that lesson the hard way.

With regard to his lofty assurances to health insurance leaders, Hardwick said they could prove to go down with former President Barack Obama’s famous quote that he frequently uttered to promote the ACA: "If you like your health care plan, you can keep it." Millions of Americans eventually received cancelation notices that their individual plans no longer met Obamacare’s requirements.

"(Trump’s) going to be criticized for that," Hardwick said. "He’s probably going to lose seats of Congress for that if people take it out on Republicans in the midterms."

In the meantime, because of the challenges that lie ahead with overhauling the nation’s health care system, Hardwick said Trump is going to need to score some political victories to capture the trust of lawmakers, the public and other players. He suspected Trump may believe his newly revised executive order on refugees, which Hardwick said was significantly better than the original effort, may help to that end.

"That might give him some political capital to use on this health care fight; because this is going to be a battle, and I don’t know if he’s going to be able to win it," he said.

Trump also tweeted Tuesday morning that another one of his promises, allowing insurers to sell plans across state lines, would be coming later.

Don't worry, getting rid of state lines, which will promote competition, will be in phase 2 & 3 of healthcare rollout. @foxandfriends

Two House committees — Ways and Means, and Energy and Commerce — are scheduled to begin consideration of the legislation Wednesday.