Last Monday, the owners of the Wausau-area restaurant where Frances Slezak worked as a server called everyone in to tell them they’d been laid off.

They said they hoped it would be temporary. They said their employees would have their jobs waiting for them on the other side of the battle to limit the spread of COVID-19. But for this period of weeks or months, the restaurant would be closed.

"In the service industry, we're always and forever getting bad news," Slezak said. "This table didn't leave a tip. My shift got cut. ... We always have a bit of gallows humor."

But there was no humor at this meeting. The mood was somber, Slezak said. People were scared.

Slezak is one of tens of thousands of workers in Wisconsin to have lost a job last week. The crisis has upended lives and disrupted the economy on a scale that hasn’t been seen before in living memory.

The long-term effects of these things are unwritten, but they are likely massive, extending to every part of the state's economy, and perhaps affecting 2020 elections and other aspects of state politics.

Despite calls from some local officials, Gov. Tony Evers and legislative leaders have said they will not postpone the state's April 7 elections, which include a presidential primary, a state Supreme Court race and hundreds of local races.

Remember, folks: the best thing you can do to help protect not only you and your family, but our healthcare workforce is #StayHome. #COVID19 pic.twitter.com/dVwvihX20f

For most people, these political contests have taken a back seat to more immediate health and safety concerns. But the way people experience the crisis and the government's response to it could shape the way they play out.

Wisconsin Public Radio reporters spoke to people across the state about their experiences in the early days of the pandemic, asking them how they were affected and what they were feeling about the response.

Slezak has a 6-month-old baby at home. She's one semester away from finishing a degree in elementary education. It’s her second degree, part of a plan to change careers. She was looking forward to beginning her student teaching.

Slezak's partner is a respiratory therapist. He's working long hours already, and they both expect his work to increase as more people suffer from severe cases of the pandemic illness. They worry about his safety, but they're also grateful for his relative job security in a difficult time. Their household will be able to get by financially. But like so many others, she's reeling.

As for the government response, she’s found it confusing, with contradictory messages coming from within the Trump administration and down to state and local officials. She's not the only Wisconsinite who feels that way.

'I Wake Up With My Heart In My Throat'

As the state shut down public gatherings and experts recommended social distancing last week, Wisconsinites grumbled about the lack of toilet paper at stores. Some worried about vulnerable family members or friends. And nearly everyone waited to learn what the fallout of these measures would be — whether they would work to protect people, and whether proposed economic rescue measures would be effective in helping those who need it.

At 59, Chris McDonough is on the cusp of what scientists say is the highest-risk age group for the disease. She lives in Sun Prairie with her daughter, who has multiple sclerosis, and her husband, who has a chronic lung condition. He works for Dane County’s information technology department, and has been going to work, Clorox wipes in hand, often working in a separate office from co-workers.

"People are getting a little bit of time now to look at things and understand that we are all interconnected," McDonough said. "This is a terrible thing that’s happening to us. But I'm hopeful that something will come out of it ... some heightened awareness."

McDonough said the response from the federal government to the crisis "is a complete disgrace." She said the Trump administration was slow to recognize the seriousness of the new coronavirus, and that its spread, including the uneven distribution of testing, has exposed weaknesses of the United States' health care system.

"We are seeing all the holes now in our national health care system," said McDonough, who favors single-payer health care. The crisis "is really exposing a lot of things in our government that need to be fixed."

"People are getting a little bit of time now to look at things and understand that we are all interconnected," Chris McDonough, of Sun Prairie, said. "This is a terrible thing that’s happening to us. But I'm hopeful that something will come out of it ... some heightened awareness."

To others in Wisconsin, the response from the federal government appears to have degenerated into partisan fighting.

"They've made it political, which is not something any of them should be doing," said Josh Brown, a truck driver from Cataract who said he considers himself a constitutional conservative. He lays more blame on Democrats, but holds both sides responsible.

Orlando Thomas, of Sparta, who said he doesn't often follow politics, agreed with the sentiment that political battles are discouraging right now.

"They should've been on this and been speaking more on this than politics," Thomas said.

Geri Leis, of Sparta, who said she tends to support Republicans, said she felt positively about President Donald Trump's response to the crisis, but said some of his statements haven’t been helpful.

"He likes to talk, and he gets a little ahead of himself," Leis said. "He ought to let the experts talk a little more." 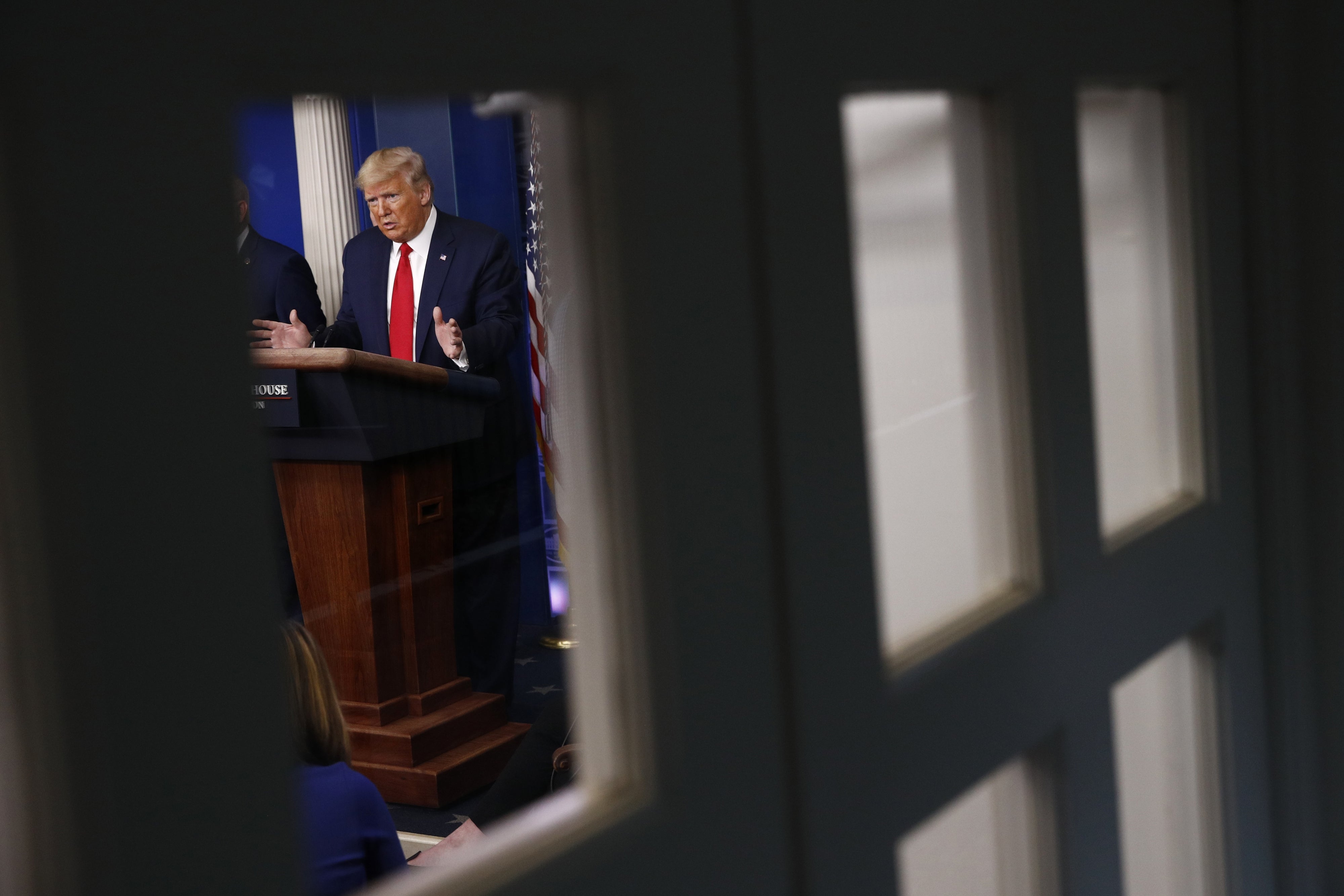 Melissa Markgraf lives in Langlade County, and jokes that she’s a "gun-toting liberal," signifying she doesn't fit neatly in political categories. She said she's concerned about the government’s response to the crisis, and about how measures aimed at curbing the spread of the virus will affect not only Wisconsin's April 7 elections but also the May 12 special election in the 7th Congressional District. She's planning to phone bank for Democratic candidate Tricia Zunker.

But more than any of those issues right now, she’s trying to find a way through the crisis for herself and her own family.

"I wake up with my heart in my throat," Markgraf said. "When I wake up and when the kids go to bed are the two most terrifying moments for me, because it's quiet."

She has a 5- and an 8-year-old at home. Her husband, an art teacher, is mostly off work now, and she’s working from home in her job with a food distributor. She said through her work, she’s seen the way the disruption is hitting small restaurant owners.

It's likely to affect them directly, too. Markgraf and her husband also own the Shady Brook Campground in Elcho. They already understand they almost certainly won't be able to open the site April 15 as they usually do. But whether they can open at all is still an unknown, and one that will matter to their family’s income.

Still, none of that is as immediate as her concern for family members.

"I have a mother who has compromised lungs. She's 75 years old and a cancer survivor," Markgraf said. "I have a very sick father-in-law who lives down the road. ... I'm scared."

Service Worker On Leave Readies To Hunker Down

Until the crisis hit, Sandy Brewer of Madison was working as a cashier at Target and a worker in the Italian department at Hy-Vee. She's taken a leave of absence from both jobs.

"I'm 73 years old and I have asthma, and if the coronavirus hits me, I'm at a very, very high risk of not making it," Brewer said.

She said the stores were absolutely mobbed in the days leading up to closures.

"I wake up with my heart in my throat," Langlade County resident Melissa Markgraf said. "When I wake up and when the kids go to bed are the two most terrifying moments for me, because it's quiet.

"It really started when the University (of Wisconsin-Madison) announced that it was closing," she said. "That signaled to people that this was quite serious."

Brewer is a political independent; she said she's not happy with Trump, and is also not happy with presumptive Democratic presidential nominee Joe Biden. She said she'll vote absentee April 7, and she'll definitely vote in November, but she hasn't decided for whom. She said the U.S. government's response to the coronavirus was too slow, putting the nation weeks behind in its response. She's concerned about the lack of enough testing for the disease, especially in the early days of its spread.

Brewer said she hates being isolated at home — "there's only so much I can do to clean my house and then I'm bored." She works the two jobs not out of financial necessity but because she likes being around people. She's hoping the jobs will still be there for her when it’s safe to return.