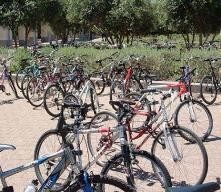 Changing Attitudes About How To Get Around
By Rhonda Fanning
Share:

Cars have been an integral part of American culture for the last century. Owning an automobile, we've been taught, comes with a sense of freedom and individuality. Over the last decade, however, there seems to have been a change in the way we think about using our cars. According to a recent study by the University of Michigan's Transportation Research Institute, driving in America has been steadily declining.

“The study found that since 2004 – so almost ten years – driving in the United States has dropped by five percent,” said Micki Maynard, Forbes contributor and former Detroit bureau chief for The New York Times. “Even if it would have dropped one percent, that would have been significant, but it’s five.”

Maynard has spent decades studying the auto industry, and her latest project, a blog called Curbing Cars, looks at why we're driving less, how attitudes towards cars are changing, and the other methods we are using to get around.

“People are driving less and public transit use is at record levels. Bike sharing programs are popping up everywhere and there are dozens of apps to help you find a taxi, or how to rent a car for a few hours,” Maynard says. “Home buyers want to live in walkable communities and young people are in no rush to get driver's licenses or afford new cars.”

She attributes the changes to several factors, “It's people who are telecommuting, it's people who lost their jobs and unfortunately had to give up one or more of the family cars, and it's people who are using public transportation in record numbers,” Maynard said. “Lastly, some folks who, for health or other reasons, are saying ‘I need to walk more, I need to ride a bike more.’”

This doesn't mean Americans are about to give up their cars and cease driving all together. Maynard uses the term ‘driving light’ to describe this new shift in personal transportation. “Driving light doesn’t mean you give up your car. I have a car, and I also have a bike. I live in a walkable neighborhood and the bus stops a block from my house.”

Maynard hopes to make Curbing Cars the leading repository for information about alternatives to automobiles. She also seeks to provide information and analysis on the future of the auto industry.

You can learn more about the project and share your views on personal transportation at www.curbingcars.com.