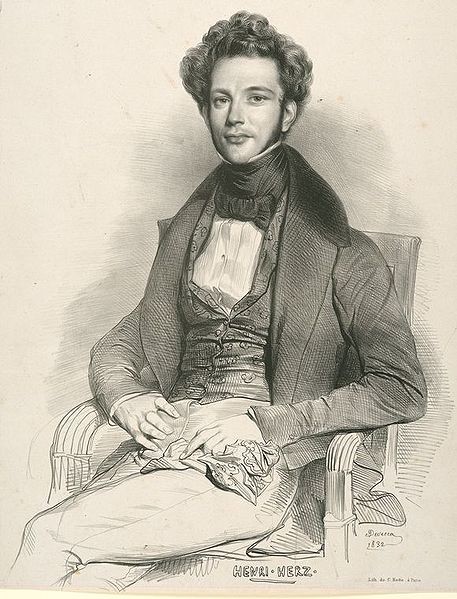 Pianist Henri Herz was dismissed by Robert Schumann as a mere “stenographer,” but in the 1830s he was the most fashionable and sensational keyboard player in Paris. In 1845, when he wanted big money to bankroll his new piano manufacturing firm, Herz headed for America.

In his book My Trips to America, Herz describes the eccentricities of concertizing in the New World. P. T. Barnum, who was Jenny Lind’s manager at the time, approached Herz in New York and suggested that he play in a concert during which the famed Swedish soprano would appear as an angel descending from heaven. Although Herz was such a flamboyant player that his gesticulations were known to make audiences bust into laughter, in the interest of dignity, Herz declined Barnum’s offer, not knowing that even more farfetched proposals would come his way.

Herz arrived in Philadelphia to find that arrangements had already been made for him to perform “illuminated by one thousand candles.” The promised novelty had made the concert sell out in less than a day. But the full house was not necessarily a blessing. When Herz finished playing the first piece on the program, an audience member shouted out that the stage was eight candles short of the advertised number, demanded his money back, and strode from the hall.

Herz’s manager, Bernard Ullmann, was a Barnum-in-training. He arranged for Herz to play in a grand patriotic concert that would involve five orchestras, chorus, and soloists, a patriotic speech, and a grand triumphal march for forty pianos. Herz balked, but agreed to perform with a mere sixteen pianos. His own chorus Le Capitole was to follow, and the finale would be a grand military rendition of Hail Columbia!

If anyone laughed at the performance, Herz would have shared in the merriment. He returned to Paris a wealthy man.