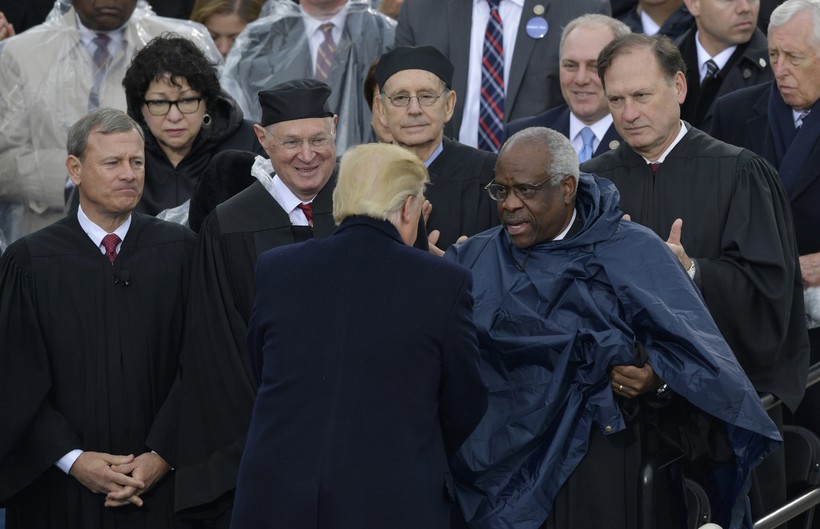 President Donald Trump speaks to Justices of the Supreme Court during the 58th Presidential Inauguration at the U.S. Capitol in Washington, Friday, Jan. 20, 2017. Susan Walsh/AP Photo

Ahead Of Trump’s SCOTUS Announcement, A Legal Scholar Makes A Case For 8 Justices

Scholar: Having 8 Justices Permanently Would Have Long-Term Benefits For Both Political Parties
By Courtney Kueppers
Share:

In the lead up to November's election, the vacancy on the United States' highest court was discussed frequently. During the campaign, then-candidate Donald Trump released a list of 21 judges he said he would consider if he was elected to replace late Justice Antonin Scalia, the famously conservative justice who died last February.

Now, President Trump has reached a decision, and has said he will announce his pick for the Supreme Court at 7 p.m. Tuesday from the White House.

Since former President Barack Obama’s nominee to fill Scalia’s seat, Judge Merrick Garland, was not given a hearing by Congress, the court has been operating with eight justices for almost a year. One legal scholar says eight justices is enough, and it should remain that way permanently.

Segall said his proposal only works if the court has four Republicans and four Democrats – similar to the makeup of the Federal Election Commission, which by law has an even number of presidential-appointees from both parties.

Under this proposal, Segall said he believes the Supreme Court would be forced to make more compromises and bipartisan decisions.

"With an even number of Democrats and Republicans on the court then the justices have to have more narrow decisions, more bipartisan decision making in the cases that divide the court," he said. "In a tie, the justices would have to (do) something because they wouldn't want to lose their power over time.

"No governmental official, no matter how well intentioned, wants to lose their power over time," he said. "So what they would do is make narrower decisions, more incremental decision making, and I think that would be a good thing."

If the court were to vote along ideological lines, which would result in a 4-4 tie under Segall’s proposal, he said then the lower court decision would be the law of the land.

"There are courts of appeals and those are hundreds of judges who are much more diverse politically, educationally and geographically than the nine (justices) who sit in Washington their whole lives," he said.

Segall said the most common objection to his proposal is instances when appeals courts in different regions of the country rule differently on a similar issue. Segall doesn’t see this as a problem, noting there have been different rules regarding issues like abortion, gun control or affirmative action in states across the country for a long time.

And in cases when there does need to be one national rule, Segall is confident the Supreme Court justices would make a decision.

"No one is more critical of the Supreme Court than I am, but let me say this, everyone who serves on the Supreme Court loves court and loves country," he said. "They are patriots, they are hard-working civil servants, if the fate of the country requires one national rule, they will find a way to compromise and they will find a way to get it done."

The size of the Supreme Court has changed throughout the country’s history. In 1789, when the Judiciary Act established the court, it had one chief justice and five associate justices, according to the Federal Judicial Center’s website.

In 1837, President Franklin Roosevelt introduced plans to expand the court to as many as 15 justices in hopes of having a court that would be more in favor of his New Deal legislation. His "court-packing" plan, as it came to be known, was not approved.

Segall said he believes there are many problems with how the court currently operates. Including the fact that justices are given tenure for life. Segall is in favor of imposing term limits for the justices, but since that would require a constitutional amendment, he’s not optimistic that will happen.

He said his plan doesn’t require a constitutional amendment and would have long-term benefits for both political parties.

But, Segall is realistic and knows his proposal is unlikely to come to life anytime soon, especially with Trump scheduled to announce an appointee. Although, he remains mildly optimistic.

"What's going to have happen in the next few weeks is the president is going to nominate somebody, the Democrats are going to filibuster, almost certainly, and the Republicans will probably end the filibuster, but they may not be able to," Segall said. "If three or four Republicans switch, this could be a long, long, long drawn-out process. If that happens, you never know."