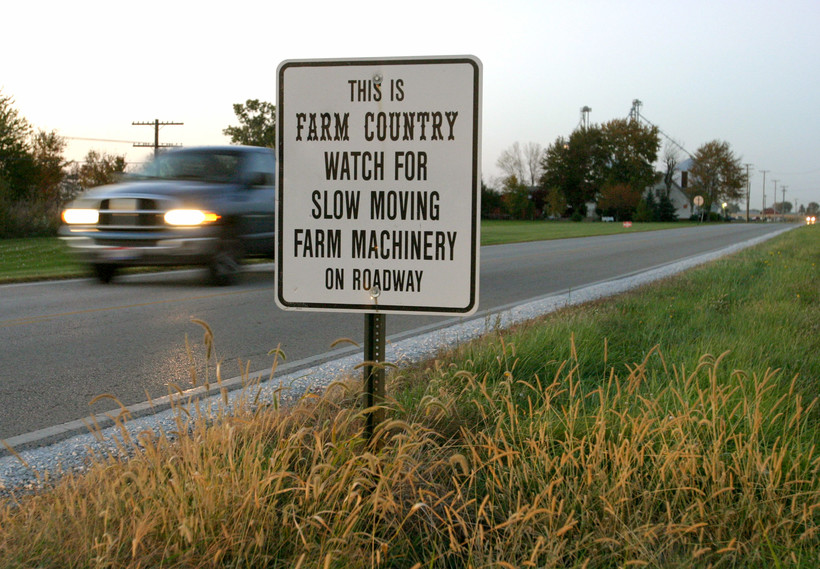 Ag Safety Expert: Be Patient When Sharing The Road With Farm Equipment

ListenDownload
WisContext: How To Avoid Collisions With Farm Implements

With the fall harvest season in full swing, motorists need to be on the lookout for more large, slow-moving tractors and farm equipment making appearances on country roads.

While sharing the road doesn’t result in the most significant number of motor vehicle crashes, when they do happen, they typically result in severe injuries or fatalities, according to Cheryl Skjolaas, interim director of the University of Wisconsin Center for Agricultural Safety and Health.

"If you look at the size of our cars, our pickup trucks, a motorcycle, you know, when you crash into this farm equipment it's bigger, it's heavier and you just don't have a lot of protection in those crashes," she said.

Farm equipment you may see on the roads this time of year can range from large tractors and combines to smaller, older equipment like silage wagons and corn pickers.

While it’s tempting to go around the slow moving machines, stop and consider a few factors before you make your move, Skjolaas said.

"You're going to need to be looking to pass in those passing zones," she said. "And then when you're making that decision of is it safe to pass, can you clearly see around and is that passing lane free and open to you, and even though that farm equipment is going slow, you need to consider the length of the vehicle," she said.

A good portion of the crashes related to farm equipment come from farm machinery making a left hand turn, Skjolaas said. Crashes often happen when motorists see the machinery moving slightly to the right and assume they are letting them by.

"You’re thinking, 'Oh great they're moving over so I can get around them,'" she said. "In reality they're probably moving over because it takes a wider turn for them to be able to make that left hand turn."

Other roadside features, like mailboxes, driveways or bridges, should also affect your decision to pass or not, Skjolaas said.

"Even though this equipment will be trying to stay in it's lane as it travels, there are going to be those roadside obstacles that it needs to move further to the left to get around," she said.

If you’re approaching an intersection, Skjolaas says to be patient.

"If you get around them and you stop short for that stop sign, now all of a sudden this heavier equipment that's going to take more to break has to have more of a distance and so that can be putting both you and that farm equipment operator at a greater risk," she said.

And at the end of the day, slowing down for farm equipment won’t cost you much time, she said.

"They generally calculate that, you know, if you're following behind a piece of farm equipment it might add like a stoplight time or two to your travel schedule for the day," Skjolaas said.