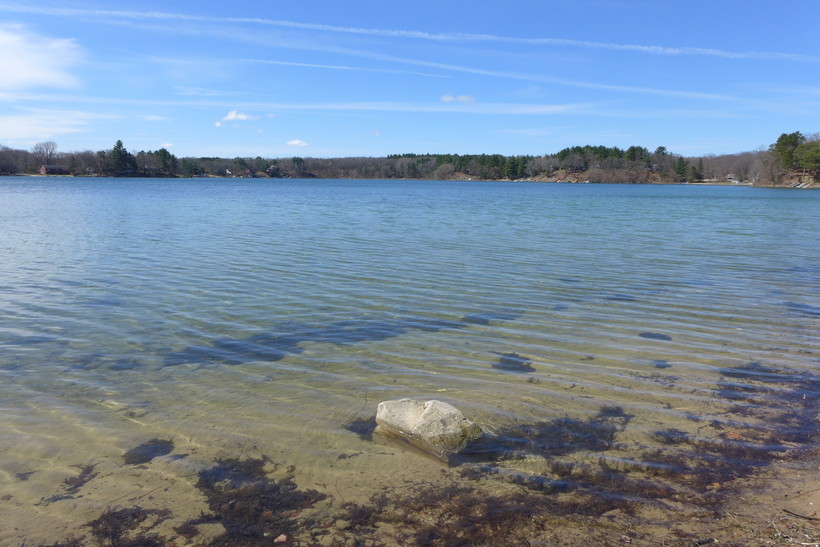 Pleasant Lake in Waushara County, where researchers say lake levels have dropped due to a near by high-capacity well.

One of those permits involved a well near Pleasant Lake in Waushara County.

People who own homes along Pleasant Lake have learned a lot over the years about high-capacity wells, which are responsible for dropping the lake’s water levels by an average of a foot-and-a-half, according to research by the University of Wisconsin-Stevens Point.

So when Schimel released his opinion on wells in May 2016, it caught Pleasant Lake homeowners’ attention immediately.

"We knew exactly when the opinion came out," said Tom Kunes, president of the Pleasant Lake Land Association. "We absolutely understand the impact of it. And it’s not good."

On a recent crisp morning, Kunes and other lakefront property owners gave a tour of the lakeshore. Water levels that once abutted the edges of sea walls had long since receded, revealing several feet of beaches instead.

Pleasant Lake is fed exclusively from groundwater, and so is an adjacent creek that emerges from the ground like water from a sponge. The creek supports rare species of plants that thrive in calcium-rich waters like these.

Francie Rowe on a beach at Pleasant Lake. Shawn Johnson/WPR

"It’s all connected," said Francie Rowe, another lakefront homeowner who is also the chair of the Biological Sciences Department at Madison’s Edgewood College. "As you can see, this is pretty shallow, so it doesn’t take much to pull this down and change the hydrology of this entire system."

Before Schimel’s opinion, when DNR regulators would decide whether to permit new high-capacity wells, they’d consider the effects of all the wells in a watershed, including how they might hurt lakes and streams like these.

After Schimel’s opinion, the DNR was less cautious. It granted permits for 190 backlogged permits, some of which the agency said would have otherwise been rejected.

When it came to the proposed well near Pleasant Lake, regulators had been willing to grant a permit before Schimel’s opinion, but only with strict limitations. After Schimel's opinion, those restrictions were relaxed, and the DNR increased the permit from 36 million gallons of water per year to 272 million gallons.

Upending A Precedent On Public Waters

Lakes and streams have always been protected by the Wisconsin Constitution’s public trust doctrine, which declares navigable waters of the state "shall be common highways and forever free."

In 2011, the Wisconsin Supreme Court made it clear in its Lake Beulah decision that public trust protections extend to groundwater, too.

"The DNR has the authority and a general duty to consider whether a proposed high-capacity well may harm waters of the state," wrote Justice Patrick Crooks in a unanimous opinion joined by the court’s conservative and liberal blocks.

"The DNR must consider the environmental impact of a proposed high-capacity well when presented with sufficient concrete, scientific evidence of potential harm to waters of the state," Crooks continued, adding "the DNR should use both its expertise in water resources management and its discretion" when deciding whether to allow or deny a well permit.

The ruling was seen as a big win for lakeside property owners and environmental groups.

"At the time, I thought this was a very challenging case," said Carl Sinderbrand, the lead attorney who argued the case. "In hindsight, it was doing what the Supreme Court always does, which is recognizing that our public trust resources define who we are in many respects as Wisconsinites. That they’re precious, once gone, they’re gone, and that we zealously protect them."

A later decision by an administrative law judge established the DNR had an obligation to consider the "cumulative impacts" of high-capacity wells on a watershed when considering permits for new wells.

Schimel’s May 10, 2016 advisory opinion upended those rulings. Schimel wrote that when the Supreme Court wrote its Lake Beulah decision, it did not consider a law passed by Wisconsin Republicans that gave the Legislature more power over state agencies like the DNR.

Critics noted that justices knew about the law Schimel cited when they ruled on the Lake Beulah case. The court specifically referenced the law in a footnote to its decision, writing that the law did not affect the case at hand.

The DNR, under the direction of Secretary Cathy Stepp, treated Schimel’s advisory opinion as law. By Sept. 30, the agency’s backlog of 190 permits, including the one near Pleasant Lake, had all been approved.

During a briefing before the Legislature’s budget committee recently, Stepp told lawmakers it was up to them to decide whether the state should do more to restrict wells.

"Here's the big policy question that I think all of you are going to be grappling with going forward," Stepp told lawmakers. "When we talk about things like cumulative impacts, there is no definition to that."

Stepp said it was up to the Legislature — and not the DNR — to decide when to put limits on how much wells can draw down the levels of neighboring lakes and streams.

"That’s outside of the confines of my authority," Stepp said. "That’s not up to me."

But when it comes to regulating wells, Republicans who’ve run the Legislature since 2011 have pushed for fewer restrictions, not more.

GOP lawmakers considered a bill in 2013 that would have banned the DNR from considering the cumulative impacts of wells, though they never passed it.

Another bill Republicans sent to the governor’s desk earlier this month would deregulate existing wells, a move backed by a coalition of business and agricultural groups who say well owners need more regulatory certainty.

As the group gathered recently for coffee, they said they were worried for the future of the lake.

"This scares me," said Fred Erickson, the real estate agent who sold Kunes his home more than 30 years ago and has been his neighbor ever since

Kunes still remembers when Erickson showed him Pleasant Lake for the first time.

Erickson said he still takes prospective home buyers out in his boat, only the lake is a lot lower than it used to be. These days, he said he warns people that lake levels could drop even more because of nearby high-capacity wells.

"I have a moral obligation, first of all, because I'm your neighbor here at the lake," Erickson said. "And I'm a friend to begin with."

But Erickson says it goes beyond that. He says that as real estate agent, he's professionally obligated to tell prospective buyers, even though it won't help him sell houses.

"Yes, I am," he said, "Because I have information that's pertinent to the property that they're buying. And if I don't tell them about that, I could lose my license."

Erickson may feel a duty to warn people about the impacts of wells on lakes, but in many ways, the state of Wisconsin no longer operates under such an obligation.