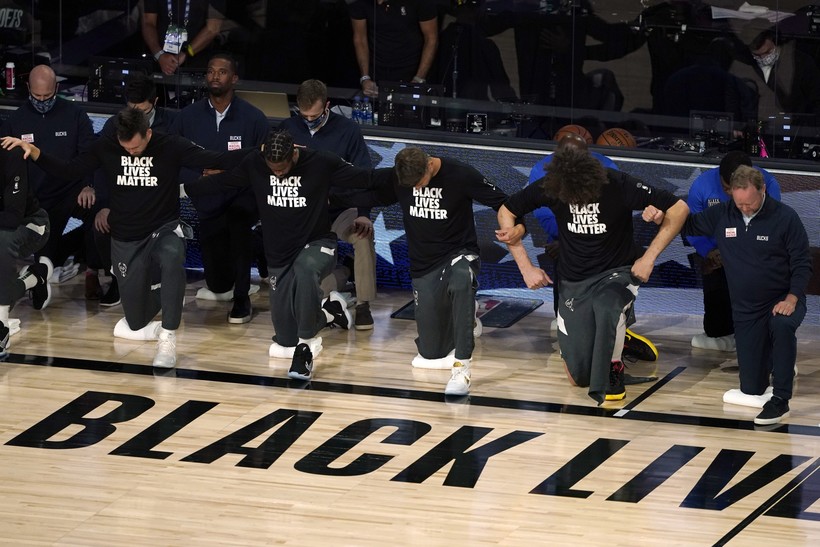 Members of the Milwaukee Bucks join arms as they kneel during the national anthem before an NBA basketball first round playoff game against the Orlando Magic Saturday, Aug. 29, 2020, in Lake Buena Vista, Fla. Ashley Landis/AP Photo

After Protest, Bucks Extend Playoff Run With Win Over Magic

They'll Face The Miami Heat In Round Two
By Megan Hart
Share:

The Milwaukee Bucks are moving on.

They beat the Orlando Magic 118-104 Saturday to clinch their first-round playoff series. Top-seeded Milwaukee has won four straight since the Magic upset them in game one.

On Saturday, Orlando closed the lead to three late in the game, but Milwaukee's bench came through in the clutch.

The Bucks will face a taller order when they see the Miami Heat next round. The Heat took two-out-of-three against the Bucks during the regular season.

Regardless of how far the Bucks go these playoffs, they’ve already made a statement that won’t soon be forgotten.

The Bucks sent shock waves through the sports world Wednesday when they chose not to take the court for their scheduled game in protest of the police shooting of Jacob Blake in Kenosha.

The move left the NBA season in question for the second time this year. Players met late into the night Wednesday to decide whether they’d continue the postseason, according to journalists inside the bubble.

Just as Milwaukee led the way earlier this week, the Bucks and the Magic were the first teams to face off when games resumed Saturday. Bucks head coach Mike Budenholzer said it was difficult to refocus on basketball, but his players have always demonstrated a high level of professionalism.

"Once the tip goes up, you kind of fall back into a little bit of a comfort level with what you've been doing for a long time, and what we're here to do in addition to fighting for racial justice," he said.

On the bench, players wore Black Lives Matter shirts. Players and coaches from both teams kneeled during the national anthem, except for George Hill, who stayed off the court until the music ended. The move made national headlines, but after the game, Hill said he was simply in the bathroom.

Hill has spoken openly this week about his frustration being inside the NBA’s coronavirus bubble during this important moment in the fight for social justice. Initially, he didn't tell his teammates he planned to sit out Wednesday's game, but when they found out, it started a chain reaction across sports.

"Every guy in that locker room stood by my side and said if my brother isn't playing, then we aren't playing," he said.

On Wednesday, Hill and Sterling Brown read a statement from their Bucks teammates calling for Wisconsin lawmakers to act on a package of police accountability bills at a special session next week. Republican leaders indicated Friday they plan to gavel in, but not vote.

"We have to use our platform. People have to continue to speak out in Wisconsin, around the country, around the world: protest, wear shirts, take a knee. Do what they can to keep the noise going, keep their voice strong and proud, and put the pressure on these kinds of people to do the right thing," Bucks center Brook Lopez said after the game.

Players could get a boost next week when the NBA allows a few family members and close friends to enter the bubble for the first time. Teams have been secluded since early July.