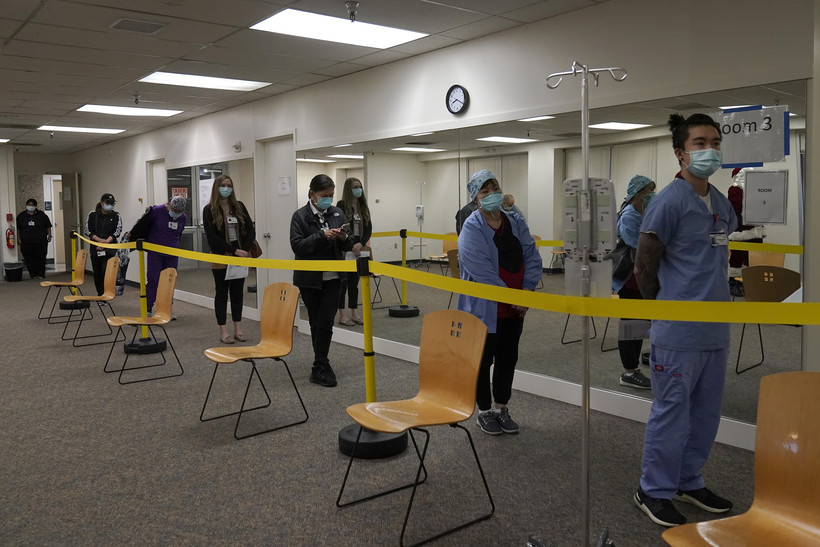 In this Dec. 24, 2020, file photo, health care workers wait in line to receive the Pfizer-BioNTech COVID-19 vaccine at Seton Medical Center in Daly City, Calif. Only about 1 percent of California's 40 million residents have been vaccinated against the coronavirus. Gov. Gavin Newsom said Monday, Jan. 4, 2021, that the pace is "not good enough" as the virus continues to ravage the state. Jeff Chiu/AP Photo

DHS reported 3,403 new cases of the disease Tuesday, bringing the average for the past seven days to 2,400 daily cases. One week ago, the average was 1,931 daily cases, although new cases and testing dipped over the holiday season.

There were 95 new deaths from COVID-19 reported Tuesday, the most since Dec. 22. On Tuesday, 4,805 people tested negative.

Of the people who got tested for COVID-19 over the past week, 31.9 percent were positive for the disease, according to DHS. That rate has been on the rise.

On Sept. 30, DHS also introduced an alternative positivity rate, one that measures the percentage of tests that are positive, instead of the percentage of people who get a positive result. The new metric takes into account people who have been tested multiple times. The seven-day average for that number is at 11.2 percent.

A graph showing the daily number of vaccinations across the state saw vaccinations increase steadily in the last days of 2020. Preliminary data shows a sharp decrease in vaccination on Jan. 1, with an increase in the days after that.

According to the Wisconsin Hospital Association, there were 1,122 COVID-19 patients hospitalized as of Monday. A total of 21,796 people have been hospitalized because of the disease, or 4.4 percent of all positive cases.

The latest figures bring the overall total of positive cases in Wisconsin to 491,341, according to DHS. A total of 4,979 people in Wisconsin have died from COVID-19.

Wisconsin's daily testing capacity — based on the availability of test supplies and adequate staffing — has grown from 120 available lab tests in early March to 59,245 as of Tuesday. The number of actual people with new test results reported Tuesday was 8,208.