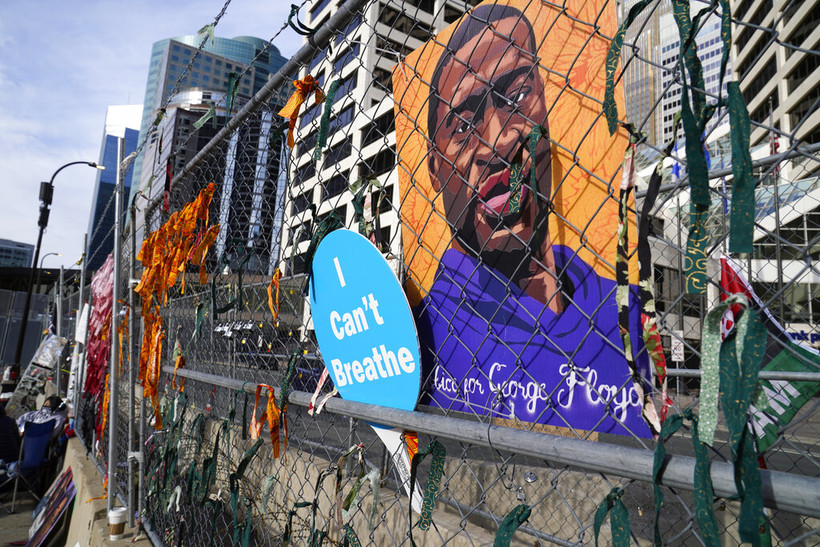 A picture of George Floyd hangs on a fence outside the Hennepin County Government Center on Tuesday, March 30, 2021, in Minneapolis. Jim Mone/ AP Photo

Two officers were arresting a suspect in an armed robbery, but the alleged perpetrator was resisting.

The veteran officer used force to take the suspect down to the ground to restrain the individual. After the incident, the rookie police officer present during the arrest noticed no mention of force was made in the official report — despite department policy to disclose all incidents involving force.

Detective Joel Markon with the Superior Police Department acted out the above incident with another officer on Thursday as part of a training through the Active Bystandership for Law Enforcement, or ABLE project. The training program was developed by Georgetown Law’s Innovative Policing Program and law firm Sheppard Mullin.

A less experienced police officer may feel uncomfortable confronting a higher-ranking officer about police misconduct, but the program runs through such scenarios with law enforcement agencies to better prepare officers to intervene and prevent harm or wrongdoing.

"This is a reminder of just how we treat people and what to do when you see another officer maybe getting into trouble," Markon said.

Superior’s training comes as a trial is underway for three former Minneapolis police officers — Tou Thao, J. Alexander Kueng and Thomas Lane — over whether they were obligated to intervene and prevent the death of George Floyd, who was murdered by former officer Derek Chauvin. Chauvin kneeled on Floyd’s neck for more than nine minutes before Floyd died in May 2020, sparking global protests and calls for reform.

Lisa Kurtz, the project’s director, said the program was created that summer in response to an outpouring of requests for training after Floyd’s death.

"It comes up in class conversations quite frequently, and people are recognizing that duty to intervene is not new," she said. "The duty to intervene has been confirmed by the courts for years and years now. But, what we haven't done is train officers on how to intervene. I think agencies are starting to realize that officers really need that training, that it's just as important to their safety and the safety of their communities."

More than 200 agencies have adopted the program nationwide, including the Minneapolis Police Department.

The Superior and Milwaukee Police Departments are the only two agencies in Wisconsin that have so far been accepted to the program, which has a list of requirements for participating agencies. They must submit two letters from community organizations vouching for their sincerity to improve policing.

Both departments have encountered incidents prior to Floyd’s death over allegations of police misconduct or excessive use of force.

Superior’s Commission on Communities of Color wrote a letter supporting the city’s police department because the agency has been aggressively pursuing best practices in policing, according to commission member Jenny Van Sickle.

"We want to support the positive efforts that are coming forward to raise the bar on our force on behalf of our community that deserves the absolute best, and particularly for communities that have already experienced high levels of violence and oppression and poverty," Van Sickle said.

Van Sickle said the training also helps officers avoid career-ending decisions. Agencies that adopt the training program must also provide a wellness program that includes access to counselors or social workers for officers in need, establish an awareness program to promote intervention, and have a written anti-retaliation policy to ensure officers who intervene aren’t punished.

Last year, the Milwaukee Police Department proposed, and the Milwaukee Fire and Police Commission adopted, a whistleblower protection policy that clarifies officers have a duty to report misconduct without fear of retaliation.

Gov. Tony Evers also signed a bill into law in August that creates a uniform use-of-force policy and a duty to intervene when officers inappropriately use force, which went into effect on Jan. 1.

Kurtz said it’s more difficult than people think to intervene due to cultural and psychological factors, including the brain’s flight, fight or freeze response in stressful situations. The training educates officers about those factors and ways to overcome them, as well as building a culture of peer intervention within agencies.

That includes applying a method known as direct, distract and delegate. An officer may directly ask a colleague to stop an action that’s wrong or may cause harm, distract the officer from the situation or recruit another officer or superior to intervene.

Superior Police Sgt. Matthew Brown, an ABLE-certified trainer, said the goal is to decrease police misconduct, provide support to officers in need to avoid incidents, and build trust between police and community members.

"To have our community’s support, we have to be open and transparent with them, and they have to trust that we're taking all the steps that we can, as individual officers, as departments, as law enforcement as a whole, to not overstep our bounds or do anything illegal," Brown said. "They need to have faith that they're safe with us."

The city’s police department has shown improvement over the years as the average number of incidents involving use of force has declined. The agency made roughly 2,000 arrests each year prior to the COVID-19 pandemic.