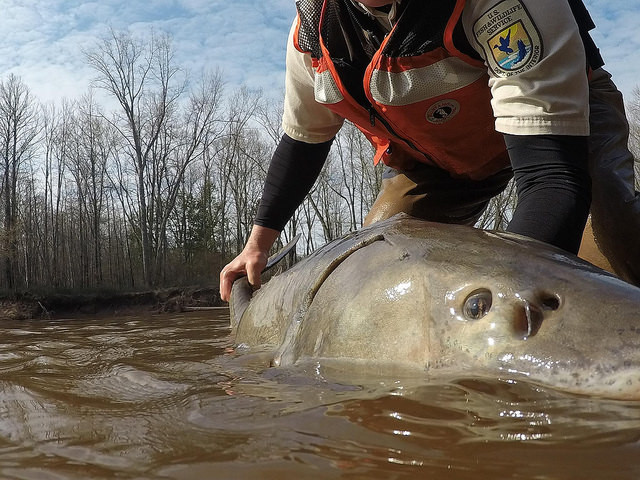 After Decades Of Decline, Lake Sturgeon Could Be Headed For 'Threatened' Designation

Prehistoric Fish Species Thought To Be At 1 Percent Of Historic Numbers
By John Davis
Share:

The Center for Biological Diversity is petitioning the U.S. Fish and Wildlife Service to designate lake sturgeon as "threatened" under the Endangered Species Act

The environmental group wants the federal government to develop a recovery plan for the fish whose decline has spanned more than a century.

"We looked at all the listed species in the U.S. that have recovery plans," said the center's Jeff Miller. "Species that get a recovery plan are twice as likely to recover and eventually come off the endangered species list."

He said in the late 1800s there were more than 15 million lake sturgeon in the Great Lakes alone. Today, Miller said, lake sturgeon populations in North American lakes and rivers are at 1 percent of historical numbers.

Lake sturgeon are a prehistoric fish that have been around for 200 million years. They are bottom feeders that can grow to 8 feet long and live to be 100 years old. It takes more than 20 years for female lake sturgeon to reach sexual maturity, and once they reach that stage, they only spawn every two to three years.

Miller said overfishing and poor water quality were early contributing factors to the demise of lake sturgeon populations, but in recent decades, dams have blocked the natural reproductive cycle of the fish.

"Look at the Great Lakes alone, there's more than 7,000 dams on tributaries and only about a third of those are passable for fish. The upper Mississippi River has got 37 locks and dams on it," he said. "These fish, they're either fragmented and isolated because the dams prevent them from moving, or they're blocked in a lot of these rivers pretty close to the lakes, so there are migration barriers."

Miller said Wisconsin has one of the most stable populations of lake sturgeon in the United States in Lake Winnebago where 20,000 adults are located. But he said the adult population in Lake Michigan is only 3,000 with nearly half of that population in lower Green Bay. Of the 20 Wisconsin tributaries that feed western Lake Michigan, Miller said lake sturgeon are found in just eight. Lake sturgeon are also endangered in Lake Superior and considered threatened on the upper Mississippi River.

There are spearfishing and hook and line seasons in Wisconsin, and fishing regulations for the lake sturgeon are strict.

The U.S. Fish and Wildlife Service currently considers lake sturgeon a species of special concern and the federal government has lake sturgeon breeding and monitoring programs.

"I think more can always be done. Usually when you put a focus on one species or concentrate efforts on one, then another species would tend to suffer unless more funding came into the picture," said Doug Aloisi, project director at Genoa. "There's a benefit to being on the endangered species list and having a recovery plan."

Miller said it will be at least two years before a federal recovery plan will be implemented. The Center for Biological Diversity filed the petition in mid-May and the U.S. Fish and Wildlife Service has 90 days to make an initial finding of whether or not lake sturgeon will qualify for protection as a threatened species.

Correction: An earlier version of this story incorrectly stated the type of federal designation being sought for lake sturgeon. The petition seeks to classify the species as threatened. The story was updated at 9:55 a.m., Friday, July 6, 2018.