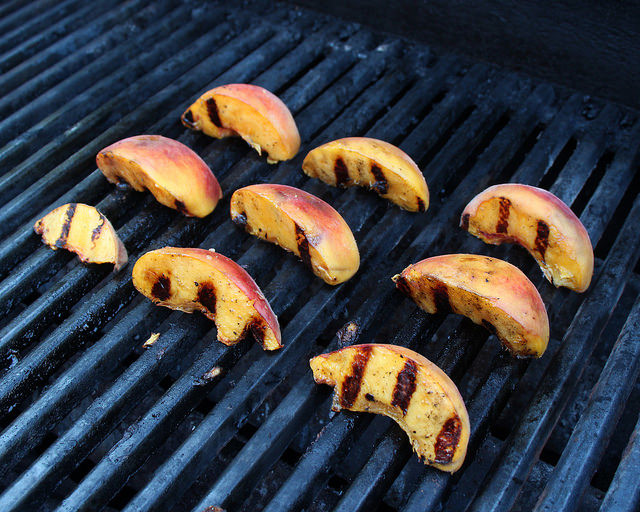 Peaches are just one of the many fruits that can be grilled. woodleywonderworks (BY-CC)

No Need To Stop At Meat When Cooking Out
By Judith Siers-Poisson
Share:

There’s nothing quite like the smell and taste of food cooked on an open fire. With a bounty of late summer fruits and vegetables, it’s a great time to reach beyond meat for grilled goodness.

Grilling buddies Mad Dog and Merrill are “nationally recognized and self-proclaimed Grillologists.” They are big fans of making all parts of a meal, not just the main protein, on the grill.

“My saying is that there’s not a vegetable you can grow, get at the local produce stand or the market that you can’t put directly on the grates of a grill,” he said.

Some preparations used for meats also work well for vegetables.

“Marinating them adds a great flavor,” Merrill said. “Obviously, we’re not trying to tenderize them, but a nice glistening of oil is definitely needed.”

In addition, they don’t need nearly as long a time in the marinade to pick up the flavors, so 30 minutes is sufficient.

For the actual cooking of the vegetables, there are several options. Arranging them on skewers is convenient and makes good use of the cooking area. Mad Dog and Merrill said that they can also be placed directly on the grates, or in a cooking basket.

Direct heat will always work, they said. A medium heat setting is good to start with, but cooks should pay attention to the quirks of their own grill. Besides the direct method, vegetables can also be packaged in foil and cooked off to the side. That indirect method will take more time, and created more of a steamed effect. Merrill said that 30 minutes is usually enough.

Just for fun, Mad Dog said that veggies are a great way to show off team spirit at a tailgate get-together. Yellow and green zucchini are prefect for Packers fans, and red peppers and tomatoes with white onions suit Badgers fans.

“They all make an appearance in the Midwest, in Wisconsin, when it comes to tailgating,” he said.

Fruit is a great addition to grilling as well. Merrill said that he is marinating some peaches, plums and nectarines with brown sugar, bourbon, spices and fresh mint. “It’s like a Kentucky Derby mint fruit kebab,” he said.

Mad Dog offered that Merrill asked whether he could just “come over and drink the liquid and you can keep the peaches?”

Mad Dog warned against overcooking fruit on the grill because the texture can degrade quickly. Another fruit option is apple wedges on the grill. He recommended brushing the wedges lightly with olive oil, then dipping them in a mixture of white sugar and Cajun spices. Cooked for about 15 minutes on medium heat standing up with the skin side on the grate (so the sugar wasn’t touching the grill), they were a great pairing with bacon-wrapped pork according to Merrill.

Following are two more recipes from Mad Dog and Merrill to give grilled fruits and vegetables a try.

More of their recipes can be found on their website.

Cut eggplant into ½ inch rounds. Mix olive oil, balsamic vinegar and minced garlic. Place eggplant in a glass dish or plastic Ziploc bag and pour in marinade. Marinate eggplant for about 20 minutes. Grill eggplant 4 to 6 minutes on each side. Remove from grill and sprinkle with Parmesan cheese.