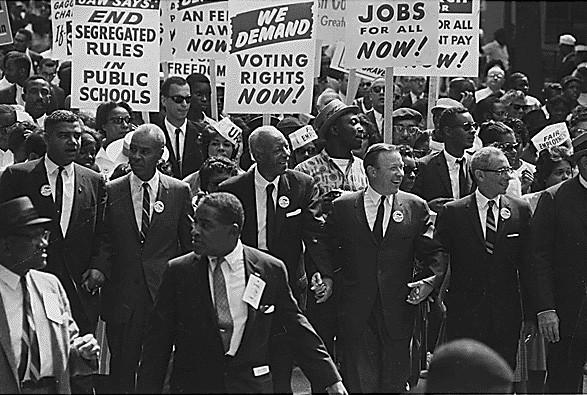 50 Years After Marching On Washington, Wisconsin Woman Goes Back

Among the thousands who gathered for the 50th anniversary of Martin Luther King, Jr.'s March on Washington was a woman from Wisconsin.

Milele Chikasa Anana is the publisher of UMOJA Magazine in Madison. 50 years ago, she was fresh out of graduate school - and became a part of history.

Terry Bell: Tell me about your impressions of Wednesday.

Milele Chikasa Anana: It was just a great experience. I'd been to Washington for almost all of the civil rights occasions - probably seven or eight - beginning with the March on Washington, and then the Million Man March, and the inaugurations of Barack Obama. I've been to the unveiling of the Martin Luther King Memorial, and now I'm here. And it's the most satisfying experience I've had, of all of those things.

TB: What made this one so much more special?

MCA: Well, a couple of things. Number one, they gave a lot of respect to us "veterans" - that's what they called [us]. We were greeted with an enormous amount of reverence. They kissed us, they hugged us, they took our pictures, they thanked us - it was like returning home from the war. And this was totally unexpected.

TB: How do you feel about the fact that a lot of the issues that were brought up in 1963, we're still dealing with today. It's difficult to find a job. It's getting more difficult for a lot of people to vote.

MCA: It's disappointing. It's very disappoint to know that we're fighting the same issues, maybe on a different level or in a different venue, because there are other issues that we need to be taking on. But we can't, because the basics that people need to live, and need to have their dignity, we are still dealing with.

I'm really disappointed that homelessness is a big issue in our community - in American society, a very rich society, very resourceful, the world leader. And we have a thing called homelessness. It just doesn't make sense.

It doesn't make sense that we're redrawing the voting rules so that it makes it more difficult for people to vote. The human race will always have enough problems that we can take on a new set of issues every 50 years. But we have not been able to do this.

TB: Is it too trite to say that we've come a long way, but we still have a long way to go? Or does that sum up the situation quite succinctly?

MCA: No, that's not trite at all. We have come a long way. But we do have a long ways to go.