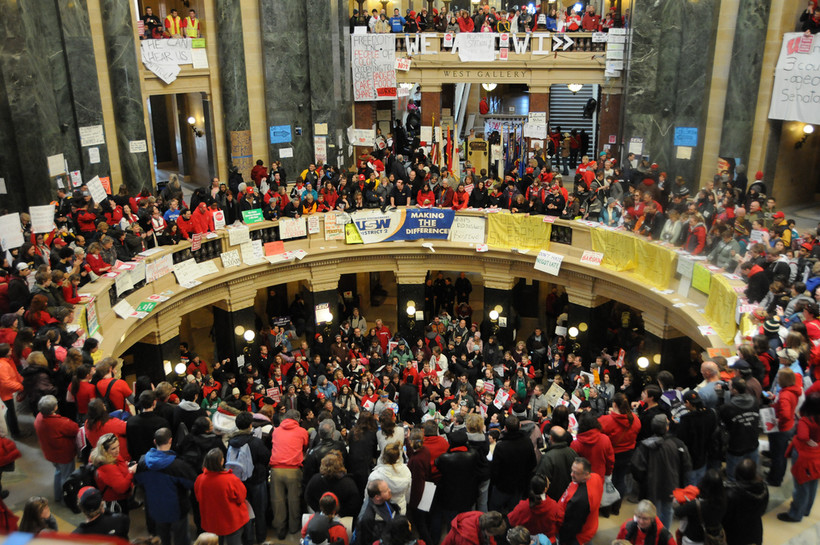 A large crowd of protestors in the state Capitol rallying against Act 10. mrbula(CC-BY-NC)

It's been five years since Gov. Scott Walker’s controversial bill ending public-sector collective bargaining brought months of fierce protests to the state Capitol and drew national media attention to the state. But time hasn't made the issue any less divisive. Looking back at the impact of Act 10, two lawmakers from the time of its passage are just as much at odds over the policy now as they were then.

Supporters of the law have argued that by reducing the bargaining power of public-sector unions, the state has been able to save money on salaries and benefits without compromising the quality of services in school districts, correctional facilities, and other parts of state government.

Michelle Litjens was a Republican representative in the Assembly at the time, and voted along with 52 of her GOP colleagues to pass Act 10. Now a small business owner in Oshkosh, she said the act was a natural outgrowth of the budget deficit the state was facing at the time, projected to be $3.6 billion at the end of the 2011 fiscal year.

She said Walker’s predecessor, Democrat Jim Doyle, had been threatening to furlough and even fire public workers to close the gap, and his own proposals to save money had been stymied by union leadership.

"(Doyle) wanted to open contracts and ask our public employees to take a 2 percent pay decrease, which obviously wasn’t happening," Litjens said. "There was absolutely no way the taxpayer had a fair shake in that (union) arbitration."

While Litjens said the process of passing Act 10 could perhaps have been handled differently and made more "pleasant," the policy itself has been good news for the state economy as a whole.

But Act 10 opponents like Sen. Jon Erpenbach — one of the 14 Democratic senators who left the state during the protests to prevent a vote on the bill — argue that public employee unions were never part of the problem with the state budget. He said that the big budget deficit of 2011 was a national problem that rippled to the state level, and that unions offered to help solve the problem after the introduction of the bill.

"The unions essentially gave up the money and gave Gov. Walker what he wanted almost immediately after Act 10 was introduced," he said. "This was really never about the money. This was all about getting rid of the collective bargaining in Wisconsin."

And in the years since, Erpenbach said, the end of public unions and the contentious battle over Act 10 have combined to create widespread harm.

"We had a whole bunch of early retirements, which is why public employees didn’t have to be laid off," he said.

Erpenbach said the state is now struggling to hire teachers and correctional officers. In Columbia County, he said, the vacancy rate for state jobs is 20 percent, and local governments statewide are having trouble balancing their budgets. Corrections vacancies in particular, he said, are costing the state extra in overtime, and are leading to dangerous situations for officers and inmates.

And the lost money in public-employee households, Erpenbach said, is trickling into the private-sector economies of their communities.

"Certain parts of the state where there is a heavy concentration of public employees, small business — whether bowling alleys, taverns, restaurants, whatever it is — they felt the economic hit as well as a result of Act 10," Erpenbach said.

Litjens, elected in 2010, said she had run for office partly with a goal of making public-sector benefits and private-sector contributions to benefits more equal. Moreover, she said that's a big reason Republicans ended up elected to every part of state government during that election cycle. She said private-sector frustration with perceived inequality had been another factor driving Act 10, because private-sector workers had been seeing their paychecks going down and health insurance costs increasing.

"Private unions were giving for more health insurance and a higher contribution toward their pension, but the public employees were not," Litjens said.

But public employees do contribute to their pensions and health insurance, Erpenbach said, as part of money they would otherwise receive as salary. Erpenbach said trying to take away from one group rather than raise up the recession-wounded private sector had the result of hurting everyone.

"(Taking) something away from somebody to make sure everyone has nothing is absolutely no way to govern," he said. "In the end it did nothing but tear us apart."