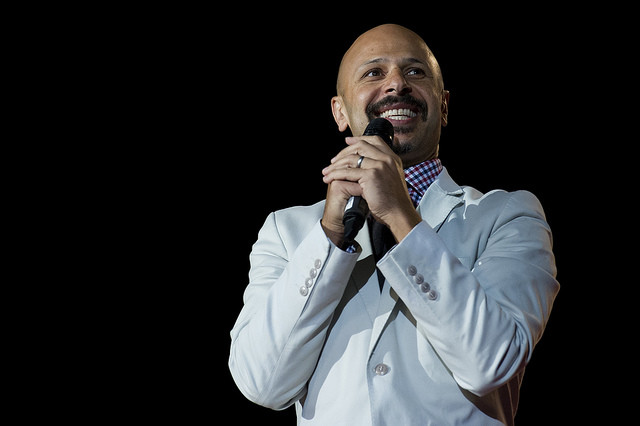 5 Takeaways From A Conversation With Maz Jobrani

Persian-American Comedian Tries To Include Laughter In Serious Topics
By Erik Lorenzsonn and Amanda Magnus
Share:

Maz Jobrani has become a prominent figure in the world of comedy, thanks to his work as a stand-up and his frequent appearances on the show "Wait Wait…  Don't Tell Me!" In his new memoir, "I'm Not a Terrorist But I've Played One on TV," Jobrani shares the story of his journey into comedy as an Iranian growing up in the U.S., exploring themes of race and family along the way.

Jobrani was on Wisconsin Public Radio's "Central Time" to chat about the book. Here are some takeaways:

1. Jobrani once played a terrorist who gets shot by Chuck Norris.

"Not all of us are that lucky," joked Jobrani about his experience getting offed by the action star.

Portraying a terrorist in a Chuck Norris action movie wasn't entirely a positive experience for Jobrani. He was made to wear a turban, even though he insisted to the crew that Afghan Sikhs don't traditionally wear turbans. Plus, he said, he was hoping for an actual fight scene with Norris. Instead, Norris's character simply ended up shooting him.

"It was a bummer," said Jobrani.

Jobrani likes to tackle serious topics in his comedy, but he does so with care. He said he never makes fun of the victims. Instead, the butt of his jokes are people in power, the media, or perpetrators of wrongdoing.

For example, when he tells jokes about the Boston Marathon bombings, he begins by emphasizing that the bombings were a tragic event.

3. Especially after Sept. 11, Jobrani's family has been confronted with racism.

Jobrani said that while he doesn't necessarily encounter a lot of prejudice for being Persian in his daily life, he noted that other members of his family have, especially in the years after Sept. 11. He shared a story of how his mother was once shopping at a Costco in Los Angeles, and had to move an unattended cart in order to reach a product on a shelf.

"And a lady came back, and said, 'Who moved my cart?' and my mother, with her thick Persian accent said, 'I had to move it to get to my product.' And the lady turned to my mom and said, 'Why don't you just move back to your country?'" said Jobrani.

Apparently the woman then called Jobrani's mother "the b-word," to which his mother retorted: "She who says it, is it."

"I thought that was a pretty good comeback for my mom," he said.

4. Jobrani's mother initially wasn't thrilled with his choice of career.

Jobrani said that when families emigrate to the U.S. from countries that are in the middle of conflict, they often have high expectations for their children. So when he told his mother he wanted to be a comedian, and not an engineer or a doctor, she was "not too into it," said Jobrani.

"She'd say, "Listen — just be a lawyer, and maybe you can just tell some jokes in court," he said.

Since then, Jobrani says that his mother has come around, and now supports his career choice. However, he said, she and other family members can be as critical as ever.

5. Jobrani has performed in front of the king of Jordan.

Jobrani said he once performed a show where the king of Jordan was in the audience. At the time, the U.S. was still fighting in the War in Iraq, and Jobrani had political material about President George W. Bush and Iranian President Mahmoud Ahmadinejad in his set.

"When I would get to those jokes, I would kind of look at (the king) to say, "Listen dude — you could do something about this,'" said Jobrani.

He added: "That was an interesting dynamic to have a king in the audience that could possibly take some of your jokes and suggestions and implement them. Whereas if you're doing a show in a dive bar in America, you hope that they understand what you're saying and that they're not too drunk to heckle you."