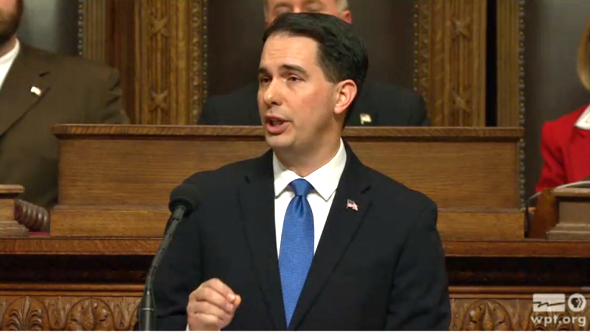 4 Takeaways From Walker's 2016 State Of The State

Gov. Scott Walker delivered a 40-minute-long State of the State address to the Legislature in Madison Tuesday night, one of his first major speeches as governor in the wake of a failed bid for the White House. Here are four takeaways:

1. The speech didn't have much in the way of major policy proposals.

In past speeches, Walker has used the State of the State address to unveil plans for massive tax cuts, job-training programs and the reorganization of state government. This year's address, however, focused more on accomplishments, milestones and existing policies, and less on the introduction of new initiatives.

Walker spent a lot of the speech touting the state's economy — pointing to metrics like unemployment and labor participation, as he's often done in the past — along with the state's record on education and job training.

He even devoted some time to championing the state's record on lower-profile areas like mental health services spending and broadband expansion.

2. Job training continued to be a major talking point.

In the lead-up to his address, Walker promised that job training would be a major focus. He kept his word. Several times throughout the speech, he repeated variations on a refrain:

"Our goal is to ensure that everyone who wants a job can find a job."

Meeting that goal, Walker said, would require a push to train workers in in-demand fields. To that end, he announced $3 million in additional funding for the Wisconsin Fast Forward programs that lets high school students dual-enroll in state technical colleges.

The governor also highlighted a controversial law change that took effect in 2015 requiring single people to work or be enrolled in job training programs to receive state food assistance.

3. Walker also talked a lot about education — and even hinted at the possibility of a 3-year college degree program.

The governor devoted a substantial chunk of his speech to lauding the state of education in Wisconsin, from the state's high ACT scores and the ongoing tuition freeze at the University of Wisconsin.

In addition, Walker had a number of forward-looking talking points. Besides vowing to increase funding for dual enrollment and promoting student debt legislation, Walker said that he's talking with University of Wisconsin officials about the possibility of launching a three-year college degree program "that would start in our high schools and continue on many of our UW campuses."

He also promised that, were the state to switch to a self-insurance model for state employee health care, all savings therein would be used to fund public schools.

Walker closed his speech with an eye toward Wisconsin's future — and possibly his own political one.

"As we think about the next 20 years, I want to hear from you about your hopes and dreams — for your families, your communities, and your state," said Walker to set the stage for what he's calling his "2020 Vision Project," a listening tour that will take him to "every part of the state" in 2016.

Walker would embark on the Wisconsin-wide trek at a time when he's been dogged with flagging approval ratings following a failed presidential bid that many residents viewed as a negative for the state.

In recent weeks, Walker has signaled he is considering a run for a third term as governor in 2018.