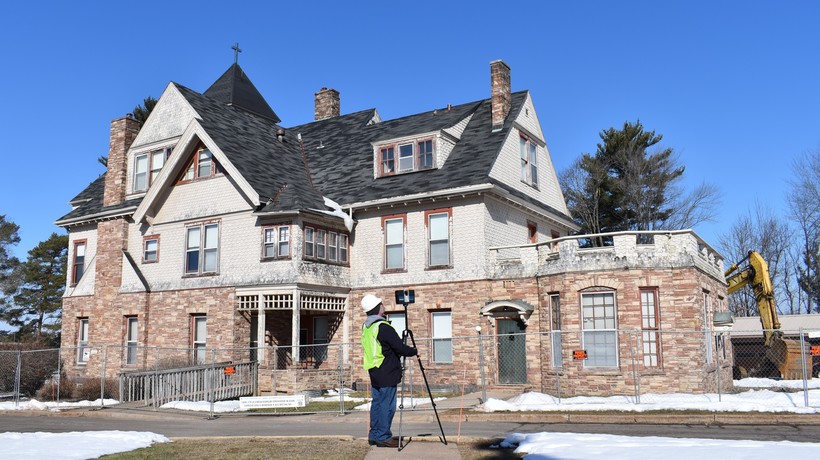 William Krueger of the University of Wisconsin-Milwaukee takes a digital laser-scan of the T.B. Scott Mansion in Merrill. The building is set to be demolished, but will be preserved digitally. Rob Mentzer/WPR

A historic mansion in Merrill that's set to be demolished will be preserved, in a way, with detailed digital scans that will allow it to be recreated in virtual reality.

The T.B. Scott Mansion was built in the late 19th century by a lumber baron and onetime state senator who was Merrill's first mayor. When owner Ascension health system sought and received a demolition permit from Merrill last month, it led to a public outcry and some last-minute attempts to save it.

Those efforts appear to have come too late. But recently, two professors from the University of Wisconsin-Milwaukee’s School of Architecture visited the site and took a series of laser scans of the building aimed at preserving it digitally even after the physical building is gone.

The camera is about the size of a small speaker. It's mounted on a tripod and slowly rotates to take in the full view. UW-Milwaukee professors William Krueger and Matt Jarosz spent a morning laser-scanning the building from all sides. Each view takes about 10 minutes to record, and the scans include a mind-boggling amount of information.

"This scanner takes a million points of data per second," Krueger said. 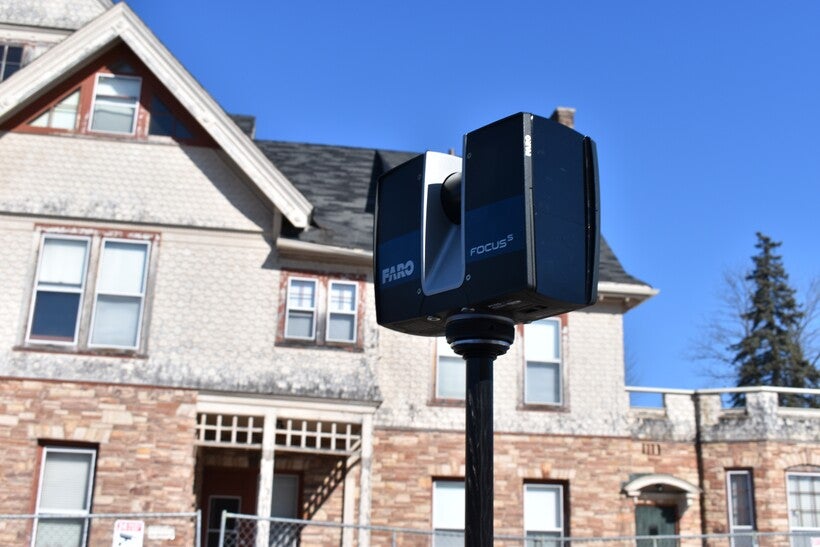 The laser scanner "takes a million points of data per second," and rotates to capture a 360-degree view. Rob Mentzer/WPR

"We can get an utterly accurate documentation of it, and that can be converted into a virtual reality understanding of the place," Jarosz said. In VR, "You could freely walk around this (building) with our scanning product."

"So for preservationists, at least, it's a sense that it's not completely gone," Jarosz said.

Taking detailed architectural records from historic buildings used to be the work of days and weeks. Jarosz and his students would spend time on ladders, taking measurements and close-up photos. Even then, he said, there was a risk they had recorded something wrong, or would misread their own notes or otherwise introduce uncertainty into their data. The scan of the T.B. Scott Mansion took a few hours, was accomplished from the parking lot, and is as close to an objective digital representation of the building as technology now permits.

It's a building that means a lot to many people in the Lincoln County city of about 9,000 people.

Through the years, the Scott Mansion has been a private home, a convent for the Sisters of Mercy of the Holy Cross, a junior college dormitory and office space for the city's Good Samaritan Hospital. It's been vacant since 2005, and is in disrepair. The city worked with Ascension on some remediation plans, and in 2018, Merrill’s Historic Preservation Committee considered and declined to declare the building a historic site.

Ultimately, Ascension decided remediation plans wouldn't work, or wouldn't be worth the cost. An Ascension executive told WPR last month that Ascension would preserve "essential architectural elements and artifacts" prior to demolition. Ascension declined to say when the building would come down.

Jarosz, who is also the executive director of the Wisconsin Trust for Historic Preservation, said he's working on building an archive of historic building scans from around the state, whether the buildings are slated for demolition or not. A former associate of his took scans of the Notre Dame cathedral in Paris that were the only fully accurate 3D scans of that building in existence after the 850-year-old church burned in 2019, Jarosz said. They've been used extensively in the renovation efforts.

But VR images of historic sites could also be used for an educational display at a local museum or historical society. Using old photos and paint samples, they can even alter the image to show the building the way it would have looked when it was first completed in 1888.

"It's too bad that it's going to go away," Jarosz said. "But at minimum, we have this record."