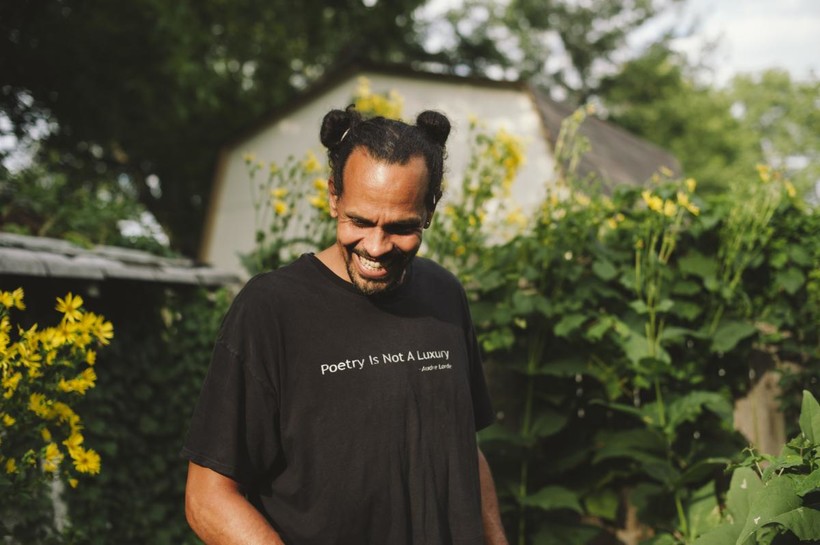 Photo via the author Natasha Komoda

365 Days Of Delight: A Poet's Guide To Finding Joy

In A Dark World, We Still Share In 'Stacks Of Delights,' Says Ross Gay
By Shannon Henry Kleiber
Share:

Ross Gay knows that delights are small. The poet appreciates the smell of fall, the intricate maneuvers of beetles and flowers in his garden, the birds chirping in the trees. But he says that those small, beautiful moments — unique to individual people, but relatable to anyone who lives on this planet — have power because we can share them.

"'Delight' might be a word, but joy is actually the idea that I'm more interested in," said Gay. "Joy is not something that you do by yourself."

Gay’s latest book is "The Book of Delights," a collection of essays about joy and delight. It's an antidote and contrast to the daily news of misery and misfortune in our world. Anne Strainchamps spoke with Gay, reaching him for "To The Best Of Our Knowledge" at Indiana University in Bloomington, where Gay is an English professor.

Anne Strainchamps: You write about how joy is almost a force that brings people together.

There’s a pear tree at the end of the street where we live. And they're the best pears from any tree I've ever eaten, and it never has disease. It's just incredibly abundant, beautiful, delicious fruit. We were going to be making apple sauce and pear sauce, and so we were harvesting and using a big old pear picker. Because it's a tree and casts shade, and it makes fruit, there are eight or nine people just hanging out under the tree looking at the fruit, sharing the fruit. And I thought "That's it. That's actually the truth."

I am so interested in the ways that we gather around what we love.

AS: But at the same time there's another kind of sharing we do a lot these days — where we say "let me share this thing I hate with you."

AS: It's really interesting that you use the word "labor" too because I think we have this misperception that joy and delight are easy. There's this whole focus on happiness. In America, everyplace you go, people are saying "Have a great day!" It seems like you're saying joy and delight are something you actually have to work at.

RG: It’s rigorous, more rigorous I think than misery. To me, joy is as much about being able to hold each other's sorrows as it is having a good day.

AS: Joy is connected to grief?

AS: Why? Why don't we have joy without grief? Because we tend to think of those as complete opposites.

RG: I know. And I think it's a sort of immature notion of actually a very adult and rigorous emotion. An emotion that understands that you and I are both going to die.

It feels like there's a kind of commercial or American notion of joy. It's like "Yeah, joy, go buy a truck!"

AS: And at the same time the planet is burning, species are dying, there is gun violence and inequality and suffering everywhere. How can we sit around and talk about how great joy is?

RG: I don't think one closes off the other. In some way, I feel like studying and attending to and sharing what you love is one of the ways of responding to what is brutal and what is awful.

AS: So like many, maybe even most women, I feel like learning to take authentic, joyful pleasure in my body has been something I had to find my way to, something I had to claim. Partly I think because as a woman, I'm born into a culture that has a very long history of disapproving of women's bodies and women's sexuality.

But the more I thought about it, well it's not just women — you're a black man. At some level this must register for you almost every day in the same way it does for me.

RG: It's funny, I'm thinking of this one little essay in the book called "Cocoa Baby" and I'm talking about putting coconut oil on my body. I caught sight of myself and I have this whole process of thinking about it. It is very vulnerable — it's really about taking delight in the very simple and tender pleasure of putting oil on my body. I think the last line of it is something like "I'm witnessing that I'm hugging myself in the process of putting oil on myself, trying to get it on my back and stuff, and I realize when you're doing that it's easy to see yourself as a child, and a child that you really love."

And it's this expression of care for this body, (a body that) is not long for this earth. Recognizing that it's a body that I also spent a lot of time policing. And I also am not necessarily kind to.

AS: Is there a practice you could leave us with? For those of us listening who are thinking "I want to build my joy muscles."

RG: I don’t know if it's a practice, but I would say let's figure out the way that we can reach out and share what we love.