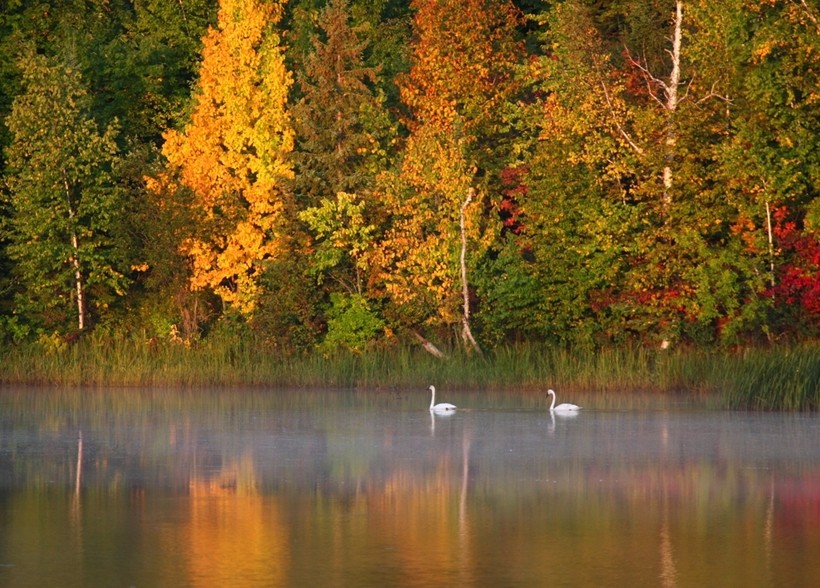 30 Years Ago, Biologists Set Out To Restore Trumpeter Swan In Wisconsin. Today, They're Thriving

A Century Ago, There Were No Trumpeter Swans Left In Wisconsin, Today Their Numbers Reach 6K
By Mary Kate McCoy
Share:

Thirty years ago, Wisconsin Department of Natural Resources biologists Randy Jurewicz and Sumner Matteson got on a plane to Fairbanks, Alaska with a goal: to bring the trumpeter swan back to Wisconsin.

When they reached Alaska — by way of businessman Terry Kohler’s private jet — on June 5, 1989 they had one day to collect eggs in the Alaskan wilderness in an ambitious effort to restore North America’s largest waterfowl back to the state.

"We were carrying these eggs in suitcases with hot water bottles, low tech but effective," Jurewicz recalled. "But the timing was very, very tight. So Terry Kohler, God rest his soul, flew us home overnight and we arrived in Milwaukee the next morning."

According to U.S. Fish and Wildlife Service protocol, Jurewicz and Matteson had to leave two viable eggs in each nest that they took from. They still managed to collect 60 eggs that year.

That effort has led to a population of nearly 6,000 trumpeter swans in Wisconsin today.

A century ago there were none left in Wisconsin. And by 1932, only about 69 remained in the entire continental United States, Matteson said.

Years of overhunting had brought the waterfowl from numbers around 130,000 east of the Rockies pre-colonization, nearly to extinction.

"Skins were ground into powder puffs and feathers were used to adorn fashionable women's hats. The numbers depleted rapidly between 1823 and in 1837," Matteson said. 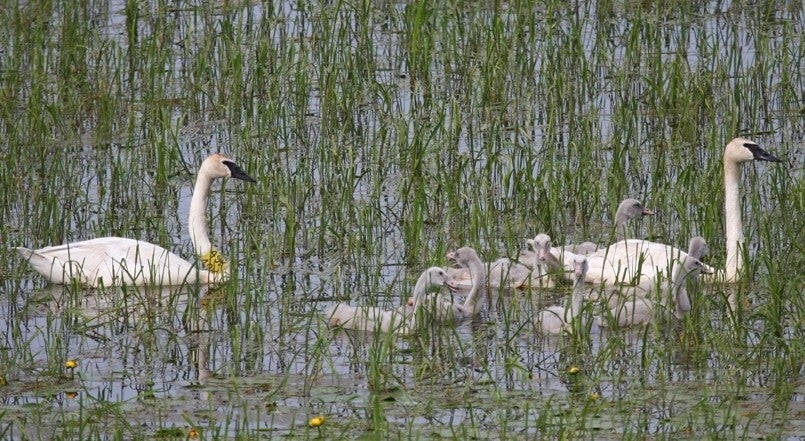 A family of trumpeter swans in Ashland. Photo by Ryan Brady of Wisconsin DNR

Prior efforts to re-establish the bird — which has a wingspan of more than 6 feet and weighs more than 25 pounds — had failed in Wisconsin. So in the late 1980s, Wisconsin DNR biologists looked to Minnesota for guidance.

"We had just received legislative authority to have an Endangered Resources Fund in Wisconsin funded by an income tax checkoff," Jurewicz said. "We needed to have a project that people could see what we were doing with their money — a showy project, and yet one that was ecologically meaningful."

Minnesota’s DNR had already gone to Alaska to retrieve trumpeter swan eggs, and were successfully establishing them in Minnesota. Jurewicz and Matteson learned to determine whether eggs were viable using a device called a candler loaned to them by the Minnesota DNR.

When they returned to Wisconsin, they incubated the eggs at the Milwaukee County Zoo.

The recovery objective was 20 breeding and migratory pairs by the year 2000, Matteson said.

The largest populations of the bird are currently concentrated in the northwestern part of Wisconsin, but it’s found in about 30 counties around the state.

Nationally, there are three main populations of trumpeter swans in North America, adding up to about 63,000 birds: the interior population (including Wisconsin), Rocky Mountain and Pacific Coast.

"It is extremely gratifying and very rewarding," Matteson said. "It's really been a team effort, many public and private partnerships have made this all possible." 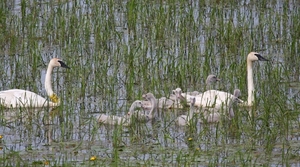 After a complete extirpation of the trumpeter swan population in Wisconsin, an ambitious reintroduction project was launched 30 years ago to bring them back to our state. We hear about the challenges and successes from two biologists who were involved from the start.