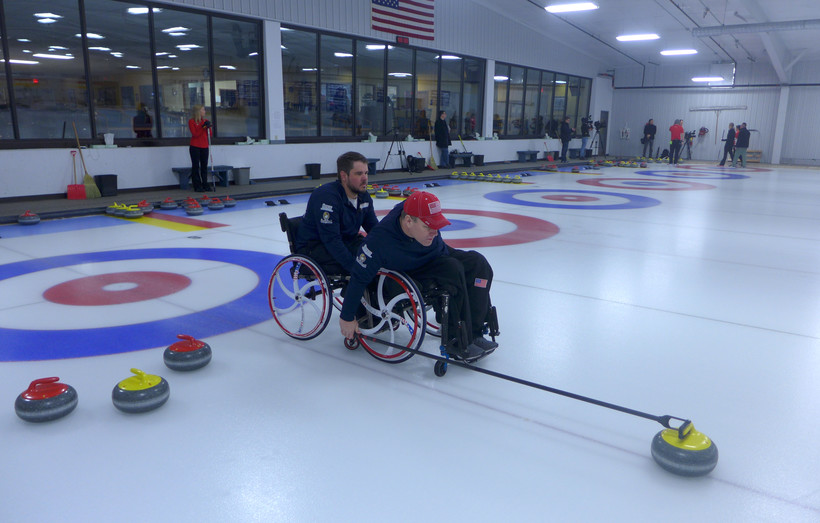 Curling fever is alive and well across the United States after the U.S. Men's Olympic Curling Team took gold at the 2018 Winter Games. For those missing their regular fix of the game of precision and strategy, you’re in luck.

The Paralympics kick off this week in Pyeongchang and Team USA’s Paralympic Wheelchair Curling Team features another group of Wisconsinites to root for.

One of them is Kirk Black.

He’s what could be called a "reverse snowbird." Instead of escaping Wisconsin snow storms to head south for winter, Black does the opposite. It’s a phenomenon that’s so rare, we couldn’t think of a word for it.

But he has a good reason. He moves his family to Madison for six months every year from San Antonio, Texas — all for curling.

During a January afternoon at the Madison Curling Club, Black throws rocks while his teammate, Justin Marshall, of Evansville, stabilizes his wheelchair for him.

The two have only been curling for about four years and are now competitors on Team USA’s Paralympic Wheelchair Curling Team. Black is the team’s skip, which is like the captain, and Marshall is the team's second.

"It's going to be our first Paralympics together. I call Justin, 'Son,' and he calls me 'Grandpa.' I am the eldest on the team by just a few months," said Black, 48, laughing.

Black first tried curling at the National Veterans Wheelchair Games in Milwaukee in 2007, but didn’t get hooked until 2012.

Marshall was watching curling on TV and heard the announcers talking about curling legend, Steve Brown, who was the Paralympics coach at the time. A mutual friend introduced the two and the rest is history.

"I met him and basically from then on he just encouraged me," said Marshall. "After being on the ice like three, maybe four times, (Brown’s) like, 'You have to come to the Team USA tryouts.' I'm like, 'No, no, no, it's way too soon. I don't know the terms of the game even. I don't know what I'm doing.' He's like, 'You have to come,' ... That year, I ended up making the top eight high performance teams."

Curling at the Paralympics made its debut in 2006 and is scored the same way it is at the Olympics. Players take turns sending 44-pound rocks down a sheet of ice to a target, known as the house. The team that has rocks closest to the center of the house gets the points.

Able-bodied curlers lunge up to 20 feet down the ice to throw their rock. Marshall, 31, says in wheelchair curling, they deliver the rock by hand or with a stick. "So, we have basically a static delivery. You sit still and push the stone," said Marshall. "You're only pushing that stone for basically as long as your arm is. So you have about a three foot delivery to get the stone where you want it to go 120 feet down the sheet of ice."

"Our sport is not nearly as precise as theirs," said Black. "We can't produce stones that move as fast as theirs in some instances. But, I'd say our sport is tremendously more difficult."

It’s the love of curling that keeps Marshall coming back day after day. That and his competitive nature.

"I like to say I have a pretty even keel out on the ice," said Marshall. "I like to keep things lighthearted. At the end of the day, we're playing a game out there, so we need to have some fun."

Black says he’s not afraid to take the last shot on the team, a necessary skill as the team’s skip.

"My nerves are pretty strong," said Black. "You know, being in the military I’ve been in a lot of strenuous situations so I think it helps to come and have a little bit of experience there as well."

Black served in the Gulf War and was primarily stationed in Germany.

Team USA is spread out across the country. Two of its athletes are from the East Coast: Stephen Emt lives in Connecticut and Meghan Lino calls Massachusetts home. The fifth curler on the team, Penny Greely, of Green Bay, is a three-time Paralympian. She competed in curling at the 2014 Paralympics in Sochi, Russia and won a bronze medal in sitting volleyball in the 2004 games in Athens, Greece.

Because the team is spread out geographically, they're only able to practice together about once a month — it's a challenge many smaller countries don’t have to deal with.

"They can easily drive and see each other," said Marshall. "Here, we're spread out. It takes flights and hotel rooms. A full weekend trip, you're looking at a couple thousand dollars, just to practice together ... it's one of the harder things to deal with as a team."

Like the Team USA Olympic curlers, Paralympic curlers have to actively fundraise and hold down jobs to finance their life as an athlete.

Marshall is an architectural associate in the Madison area. Black does contract work for a Texas-based company making web pages and documents accessible for people with visual disabilities. Greely is a case worker for Brown County.

Black added that the Paralympic team gets even less money in sponsorships than the Olympic team does to help offset costs.

Last year, Black said he spent $28,000 on curling. Marshall said he took about two to three months of unpaid leave for the sport.

But Marshall says it’ll be worth it, especially once the games kick off.

"I'm looking forward to the Opening Ceremony," said Marshall. "I've watched them on TV, right? The national anthem or whatever is playing and they announce Team USA, right? And everyone comes walking out and waving. I think once that happens it's all really going to hit home and sink it.”

Team USA’s first curling match is Saturday afternoon against South Korea. The Paralympic broadcasts will be carried by NBC.