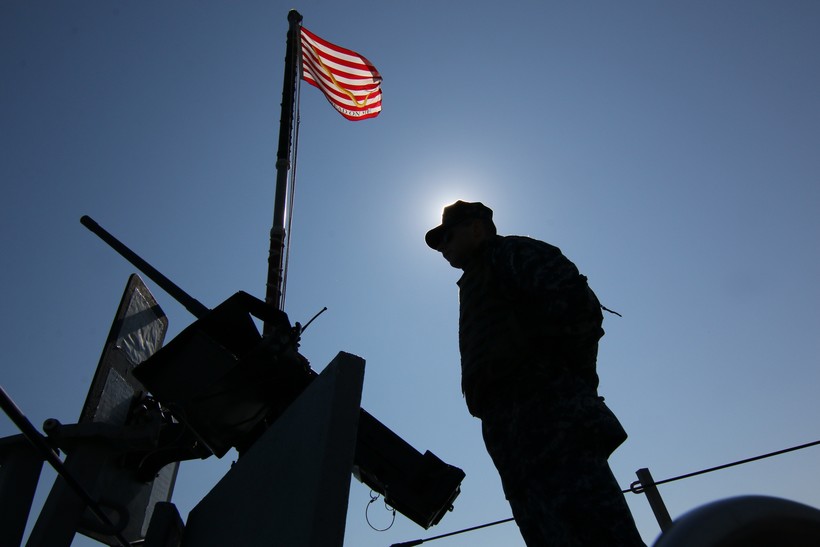 A U.S. Navy sailor stands in position on board a US Navy destroyer during joint military exercises with Bulgarian and Romanian naval forces in the Black Sea for exercises just few hundred miles off the Crimean peninsula, near Varna, Saturday, March 15, 2014. ImpactPressGroup/AP Photo

Transportation Secretary: 'The Ripple Effect Of This Grant Will Be Felt Statewide'
By Megan Hart
Share:

Fincantieri Marinette Marine is in the running for a multi-billion-dollar contract to design and build 20 new frigates for the U.S. Navy. State officials announced this week a $29 million grant to give the company a boost.

Fincantieri Marinette Marine and Lockheed Martin delivered a littoral combat ship to the U.S. Navy earlier this month. The future USS St. Louis will be commissioned later this year.

As Marinette Marine vies for future U.S. naval contracts, the state of Wisconsin has awarded the shipyard a $29 million grant through the state Department of Transportation's Harbor Assistance Program, Gov. Tony Evers announced Tuesday. The success of Marinette Marine is "vital" to the health of the local economy, Evers said in a news release.

Marinette Marine is one of four shipyards in the running to build the U.S. Navy's new guided missile frigate. Its proposed design for the ship is based on its FREMM frigate, which the Italian navy has used since 2012, according to a news release from the company.

"This is supposed to be a pretty important class of ship for the Navy," said Sam LaGrone, editor of USNI News, who's been covering the frigate contract for seven years. "It's going to be the first new design of a Navy ship in a long time."

The Navy plans to award a contract for 10 frigates this year, while a contract for an additional 10 ships is planned for the mid-2020s. The budget for the initial ship is $1.3 billion, while the Navy aims to keep the average cost for subsequent frigates closer to $800 million, according to USNI News.

LaGrone said the Navy will evaluate frigate proposals not only on cost and design, but also on how effectively it believes each shipyard can manufacture the frigates. The Navy will look at the facilities and workforce each shipyard has in place, he said.

"So each domestic shipyard in this particular program has a whole series of criteria and evaluation for how well they're going to be able to go and build the ship," LaGrone said.

For a cold weather shipyard like Marinette Marine, the amount of covered manufacturing space is especially important, LaGrone said. Marinette Marine's indoor production space is about the size of 10 football fields, according to a news release from Evers' office.

In recent years, Fincantieri Marine Group has invested more than $100 million in enhancing its facilities and expanding its workforce in the Midwest, CEO Dario Deste said in a news release last year.

The Harbor Assistance Program grant will help complete projects including the building of a vertical ship lift structure and dredging to facilitate the construction of larger ships. The Harbor Assistance Program was created in 1980. Through 2018, the largest single grant ever awarded through the program was $7.1 million for the Port of Green Bay's Cat Island Restoration Project.

"The ripple effect of this grant will be felt statewide," Craig Thompson, the state's secretary of transportation, said in a news release. "Wisconsin’s ports are major economic hubs generating thousands of jobs.”

The grant was included in the state's two-year budget Evers signed in July 2019. The spending plan allotted an additional $2 million for the shipyard in the form of a Wisconsin Fast Forward grant from the Department of Workforce Development.