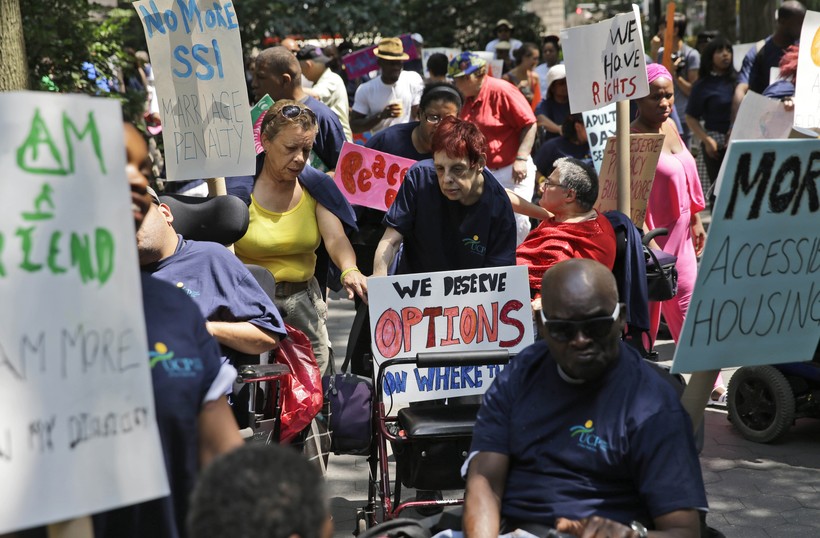 Disability Advocate: While Progress Has Been Made, Laws Have Not Kept Up
By Mary Kate McCoy
Share:

Twenty-eight years after the Americans With Disabilities Act was signed into legislation, advocates say that while much progress has been made, there is still a long way to go.

And with efforts in place in Congress to roll back some of the protections granted by the ADA, it’s important to keep an eye on the developments, says Kit Kerschensteiner, an attorney with Disability Rights Wisconsin.

Kory Macy, treasurer and board member of Disability Pride Madison, is working to raise awareness that people with disabilities work and have full lives, just like everyone else.

"For centuries people with disabilities have always been looked at like they were broken or defective," she said. "We're trying to show that no, you know, we're not broke and we're not dysfunctional and a lot of us have jobs and do daily activities just like everybody else."

Macy, who uses a wheelchair, has ataxia, a rare genetic disease that affects the cerebellum — the area of the brain that controls muscle coordination.

Macy recently spoke with WPR's "The Morning Show" host Carrie Kaufman. Her interview has been edited for brevity and clarity.

Carrie Kaufman: Tell us about your disability.

Kory Macy: So I actually have the unique experience of being in the able-bodied community for a very long time, and slowly have become more and more disabled and now use a wheelchair. But really I don't feel that my life has really changed, I mean, I can't drive anymore, I use public transportation, but I'm married and my husband also has a disability and yet we have full-time jobs. It doesn't affect us in the daily, you know, when you take shower in the morning we have rolling showers opposed to regular showers ... and so we just do things differently and maybe take a little bit more time, but we still do things just as much as everybody else.

CK: WPR’s building, which was built in the 1970s is supposedly ADA compliant, but when you got to our studios, you had difficulty, tell us about that.

KM: When my van pulls up to the parking lot, they tell me to go down the path to go up the ramp and there's a big truck parked right on the sidewalk. So we had to go around to find a way to get to the ramp to go in, and then I get up here and I have to go to the bathroom and the bathroom has bars, but you can't get into the stall, the doors aren't wide enough. So I had locked my wheelchair and basically had to get on the floor and crawl over to the bathroom to the toilet, which I mean for me is not big deal. I can do it. But there are a lot of my friends who there’s no way they would be able to do it.

CK: You would think that when people built the bathrooms to be ADA compliant that they would have people in wheelchairs test them out. So why does this happen?

KM: It’s twofold. One, if you have really old buildings and they tried to modify, you can’t always do that. But there is also the fact that the ADA was 28 years ago and wheelchairs have gotten much better, and they've gotten bigger, they've gotten wider. They have more things that make it so the person with the disability can do more in society, but unfortunately the laws really haven't kept up with the size of the wheelchair, so it might have been compliant in 1990, but the wheelchairs in 1990 are different than the wheelchairs in 2018.

CK: Do you find that there is more accessibility in other countries or perhaps even other states?

KM: I have had mixed bags depending on the country, depending on the state. So (I) just have to have a lot of patience with people because they want to help but ... they can't always, you know, change the buildings and things like that. I always ask a lot of questions and you can't just assume it’s accessible. To me, you're only as disabled as the area around you. If the area around you is not accessible ... then you can't do things; if it is, then you can do a whole bunch of stuff.

KM: I think part of the problem is in this era of politically correct, people don't always know the right terminology. I mean I'm personally more concerned with how you say things than the words you use ... I truly believe that people are good at heart and they're trying, so just ask.

When people want to help me in my wheelchair go up the ramp because they see I’m struggling, which is cool, but if I don't see that they're behind me and I'm trying to push up the ramp, all of a sudden ... my fingers get caught in the wheels ... So the big thing in my book is just ask.