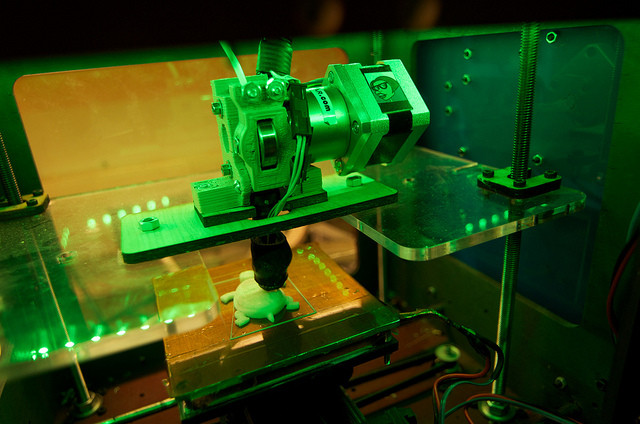 3D Printer at a Fab Lab prints a turtle. Keith Kissel (CC BY)

"It’s the shop class of a different era," said Tricia Braun, chief operating officer at WEDC. "This is really that hands on. You identify a problem, create a solution and build a prototype."

Braun points to Wisconsin’s reputation as a manufacturing state as a good reason for incorporating fab labs into school curriculums, preparing students for the industry's increasing reliance on technology and innovation.

But it’s also about encouraging the next generation of workers to think differently, in both manufacturing and other fields, she said.

"It's really not just setting ourselves up as a state for our future workforce," Braun said. "The kids that are in this are also developing more of that outside-of-the-box thinking, that creativity, the ability to say, 'I think we can do this differently.'"

In its third year, funding for the fab labs has awarded about $6 million to schools around the state — nine school districts received the grant for the first time this year, she said.

The funds are designated to equipment for the fab labs and require a one-to-one funding match from each of the schools, Braun said. Participating schools rely on additional funding sources, partnerships with businesses and fundraising to meet the match.

The grant also expects schools to open the labs up to the community within a certain number of years because the funds are also considered an investment in the community, Braun said.

School districts will eventually be able to collaborate with each other on curriculum, equipment troubleshooting and training through a web portal from the University of Wisconsin-Stout and a $63,000 grant from the WEDC.

Randy Hulke, executive director of the Discovery Center at UW-Stout, has been involved in the fab lab community since 2005, when it originated at the Massachusetts Institute of Technology. UW-Stout has had a fab lab on its campus since 2013.

"What we've kind of done is stepped back from trying to build sort of the notion that you have to build curriculum around the piece of equipment," he said. "What we've tried to do is determine what it is that you're trying to achieve for learning outcomes and then use the the equipment sort of as a tool to deliver that curriculum."

Brodhead High School implemented a fab lab at the beginning of the school year that has proven to be very popular among students and staff, said principal Jim Matthys.

"It's a great draw not only for male students but the number of female students that are attracted to those labs has been a great positive for our school district too," he said.

However, there is some friction between proponents of STEM (science, technology, engineering and math) and STEAM (which includes art) when it comes to balancing funding for science and art, as well as a silo mentality from the rest of the school.

But Hulke argues there is room for both in fab labs.

"There's really a lot of consistencies between design thinking which is employed in art disciplines and engineering design which is employed in traditional STEM fields," Hulke said "So it really is sort of a way to have a common language that really allows creative problem solving for students that are in that space."