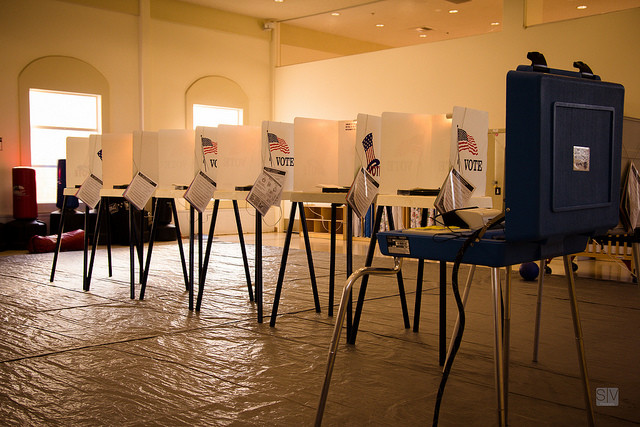 The U.S. Supreme Court has allowed voter restrictions in three states to be implemented for the November election. Photo: Stephen Velasco (CC-BY-NC)

Wisconsin’s on-again, off-again voter ID law is just part of an ever-shifting national voting landscape that many Americans face as they head to the polls next week.

A new report by the Brennan Center for Justice, a nonpartisan public policy and law institute, found that 22 states have voting restrictions that were introduced after the 2010 midterm elections. The new laws range from photo ID requirements to early voting cutbacks to voter registration restrictions.

Not since the Reconstruction Era of the late 19th Century has the country seen this magnitude of voting restrictions, said Wendy Weiser, director of the center’s Democracy Program. She said it’s mostly "red states" that have implemented the new laws.

“It’s very fair to say that the push to restrict voting has happened almost exclusively in Republican-controlled states,” said Weiser. “There have been a number of studies that have confirmed this and have shown that the greater proportion of Republicans in the legislature, the more likely the state is to (have passed) new voting restrictions in the last couple of years.”

Until recently, the Voting Rights Act made it difficult for many states that had historically engaged in voter discrimination against people of color to enact voter restriction laws. Last year, however, the U.S. Supreme Court changed that when it overturned a core part of the law. Since then, a number of states moved forward with controversial voting changes, including those previously blocked from doing so.

In 2014, there have been ongoing lawsuits challenging voting restrictions in at least seven states. For most of these, courts have instituted temporary solutions for the Nov. 4 elections.

“This is a critical role that courts play,” said Weiser. “Ensuring and protecting the right to vote, and policing the rules of election administration. This is an area where legislators are self-interested in the process.”

The court will undoubtedly review at least one, and possibly all four, of those cases in the coming months. For now, Weiser said all of the court decisions that are going to come down before the election have likely already come down — meaning that voting rules for Election Day are set.

Editor's Note: Below is a map showing the states in which voting restrictions have been passed since the 2010 election, as well as details on what those restrictions entail in each case. Both the map and the restriction information is courtesy of the Brennan Center for Justice.