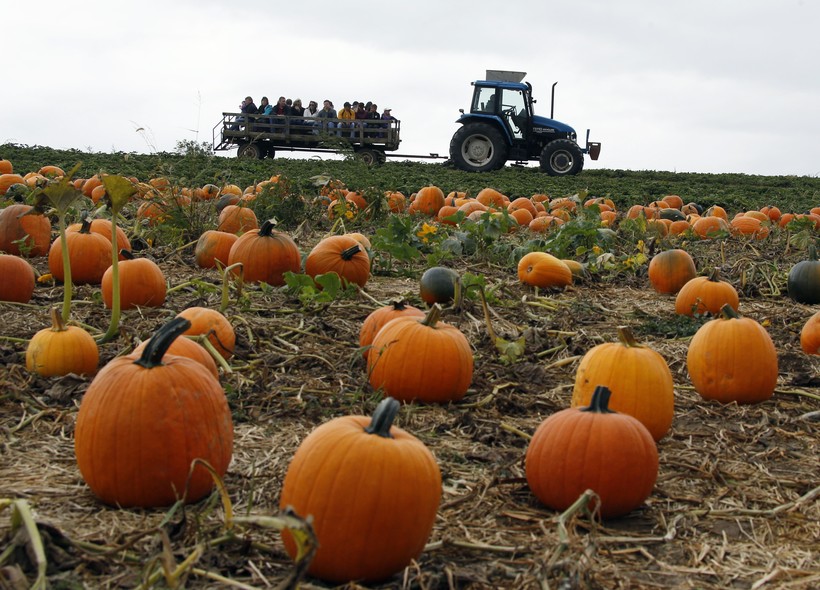 Next Year Belongs To The Giants As The International Pumpkin Convention Heads To Green Bay
By Elizabeth Dohms
Share:

Andrew Mommsen said this year's pumpkin season has been one of the best.

Mommsen, whose patch is open through Oct. 31, said he normally tries to grow about 75 different varieties of pumpkins every season, though not all are successful each year. With the pumpkins and squash, of which about 50 varieties are grown, the acreage covers about 20 acres.

"It's best to cover my bases completely and plant a lot of different varieties to see what does well," he said.

Mommsen's Harvest Hills has grown more white pumpkin varieties in the past few years, Mommsen said, noting their popularity is unsurpassed by the common orange varieties. And while bigger pumpkins might be easier to carve, it's the smaller ones that are tastier, Mommsen said.

Pumpkins that are about the size of a softball generally have higher sugar content than their larger counterparts and are most often recommended for eating.

Martin is a member of the board of directors of the Wisconsin Giant Pumpkin Growers, an organization representing more than 200 giant pumpkin growers in the state.

"We don't know if it's a hobby or sport," Martin joked of the demands of growing giant pumpkins.

For these growers, it starts with hunting down the right seed that is bred for heavyweight championships, such as Dill's Atlantic Giant. With a preference for lots of sun, these pumpkins grow best with 85 degree temperatures during the day and 65-degree nights — a good fit for Wisconsin summers.

Martin said some growers will begin the season indoors, especially with a risk of frost. The pumpkins need a lot of water but will only thrive in well-drained soil. Heavy clay areas need to be amended so that the soil is looser, Martin said.

Growing giants is perhaps most importantly about leaves on the vines — of which there can be more than 100 — which are responsible for helping the pumpkins grow. The trick, Martin said, is figuring out how to get every leaf to grow roots.

"This is fast-paced," he said, noting that the plant vines will grow from six inches to a foot in a day, and the growth of the fruit can be upwards of 50 pounds in a day — about two pounds an hour.

The record weight for a giant pumpkin in Wisconsin is 2,283 pounds. And getting such big produce out of the field is a "trick," Martin said, noting that some contraptions fit six or eight straps around the pumpkin to hoist it up.

"They're getting to be a challenging to move, I'll tell you that," he said.

An annual convention, previously held in London and Portland, Oregon, which gets pumpkin growers from around the world together to talk about ways to grow them, will be held in 2019 in Green Bay.

Presented by the Great Pumpkin Commonwealth, next year's "The Big Show" will be March 15 to 17 at Lambeau Field in Green Bay.