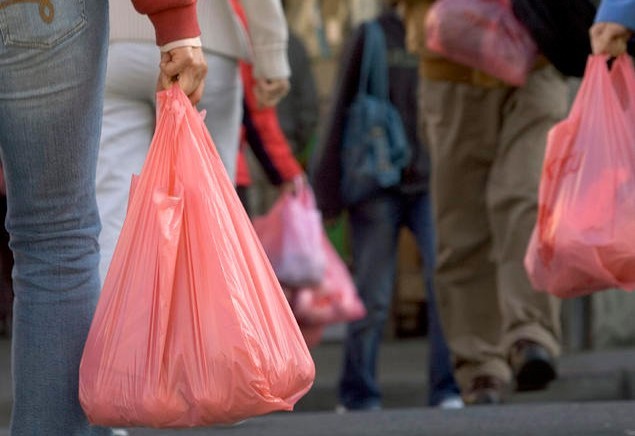 2 Takes On Whether The State Should Stop Plastic Container Bans

Business lobbyists and environmentalists are sounding off on a proposal that would stop Wisconsin communities from implementing bans on plastic containers, including bags.

The state Senate is expected to vote next week on the bill, which would forbid cities, villages, towns or counties from regulating "auxiliary containers." The legislation defines such containers as bags, cups, bottles, or other packaging that are designed to be reusable or single-use, and are for transporting or protecting merchandise, food or beverages from a food service or retail facility.

Jason Culotta, senior director of government relations with Wisconsin Manufacturers & Commerce, said Tuesday that having a patchwork of local ordinances could harm businesses, especially supermarkets. Consider a hypothetical scenario in which McFarland decides to ban plastic bags, he said.

"Does that mean that folks who are used to carrying out their plastic bags because they have the kids with them and they can't handle paper, are they going to want to shop in Madison? I don't know," he said.

Culotta added that paper bags are about five times as expensive as plastic to produce, so a hypothetical plastic bags ban would drive up the grocer's cost of business.

But National Sierra Club Vice President and former Democratic state lawmaker Spencer Black called Culotta's argument "bogus." He said that his frequent travels to California have shown him that many communities there have plastic bans and many do not.

"It's not a problem at all," Black said. "Businesses adjust."

He went on to say that communities want grocery stores, and if limits on plastic would drastically harm them, residents would take that into account.

"(Culotta's) thinking that the good people of McFarland aren't sensible enough to decide for themselves whether this is good for their community or not," Black said.

Black, who chaired the state Assembly's Natural Resources Committee, proclaimed that communities that ban plastic bags are doing the environment a favor. He said that Americans use about 100 million plastic bags each year and that only about 5 million, or 5 percent, are recycled. "A good percentage" wind up as litter, he added.

While he acknowledged that plastic bags are not a top environmental threat, limiting their use would be a "good thing to do." Further, he said that communities that regulate them benefit from lower clean-up costs.

Culotta downplayed the negative environmental effects, referring to research that's found that plastic bags typically make up less than 1 percent of visible trash in America.  He also said that in the legislative hearings on the proposal, environmental damages were "not raised at all" and that the biggest concern was over local control.

The Assembly passed the bill last month 63-35. If the Senate approves the measure, it will head to Gov. Scott Walker's desk.