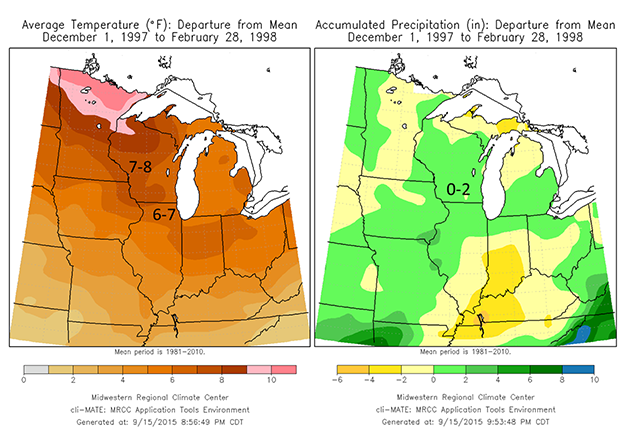 Weather maps from 1997 and 1998 show anomalies in temperature and precipitation.

Winter Was Much Warmer Than Normal
By Kristian Knutsen
Share:

The 1997-98 El Niño event stands out both for its intensity and how it brought the ENSO phenomenon to public attention. ENSO stands for El Niño Southern Oscillation, an irregular climatic cycle in which changes in air pressure over the tropical Pacific Ocean can affect sea surface temperature variations. An El Niño can develop when the waters in the eastern Pacific become warmer than average, which in turn can alter weather patterns around the world. Over the course of 1997 and the first half of 1998, one of the strongest El Niños on record emerged.

Elevated temperatures in portions of the Pacific Ocean were a primary indicator of the strength of this particular El Niño. Surface waters off northwestern South America were well above average in late 1997, reaching as high as 10 degrees Celsius above normal by the beginning of January 1998. Waters much warmer than normal were also observed along the west coast of southern North America. This heating set the stage for atypical weather events on multiple continents over the course of those two years.

Tropical regions experienced the most pronounced weather shifts during the 1997-98 cycle. Lands facing the western Pacific Ocean and Indian Ocean were much warmer and drier than normal, including the Indonesian and Philippine archipelagos, as well as the Indian subcontinent and mainland southeast Asia. On the other side of the Pacific Ocean, western portions of South America were warmer and wetter than average, while Central America was warmer and drier.

In the United States, the effects of this El Niño were particularly visible in California, with multiple communities in its southern reaches reporting record precipitation levels for their wet seasons. "The winter of 1997-98 was marked by a record-breaking El Niño event and unusual extremes in parts of the country," noted NOAA’s National Climatic Data Center in a report about the phenomenon.

As a whole, 1998 would become the world’s warmest year on record at that point, with global average temperatures 0.6 degrees Celsius above normal. (That mark has since been eclipsed by warmer years in 2005, 2010 and 2014, and 2015 is on course to set another record.)

The developing El Niño was of such prominence that Saturday Night Live lampooned it in an Oct. 25, 1997 sketch. Chris Farley, in his final appearance on the program, portrayed a professional wrestler named "El Niño."

"It is time to pay the piper because El Niño is coming for ya, and it ain’t gonna be pretty," said Farley, flailing before a green-screened stormy sky.

Farley’s home state of Wisconsin was at the heart of a swath of the northern continental United States that also experienced average temperatures well above normal due to the phenomenon.

The winter of 1997-98 was at that point the warmest on record in Wisconsin since 1895, according to the State Climatology Office. The mean temperature across Wisconsin over the season was 26.2 degrees Fahrenheit, a mark that was nearly 2.5 degrees over the previous record and close to 10 degrees warmer than the 30-year average. The season set or tied records for the fewest number of zero/sub-zero days around the state, including Milwaukee, Madison, La Crosse, Oshkosh and Superior, and just missed that mark in Green Bay and Eau Claire.

One distinct element of how Wisconsin was warmer over the winter of 1997-98 was that daily minimum temperatures were more likely to be warmer than average than maximum temperatures, as recorded by the State Climatology Office. That is, conditions did not cool down as much overnight, with low temperatures ranging from 10 to 14 degrees Fahrenheit above average around the state. Less warming was recorded during the daytime, with high temperatures ranging from 4 to 8 degrees Fahrenheit over normal. (This dynamic of winter nighttime temperatures departing more from average than days is also being observed with longer-term warming trends in Wisconsin.)

Winter ice duration on multiple Wisconsin lakes was reduced over the winter of 1997-98 . This dynamic was pronounced in southern Wisconsin, with records for shortest ice duration being set on Lakes Mendota and Monona in Madison. These records were subsequently broken during the non-El Niño winter of 2001-02.

The effects of El Niño on the Great Lakes states are one focus of the Midwest Regional Climate Center, which is a project of the National Centers for Environmental Information and Illinois State Water Survey. The organization has documented impacts of El Niño events on Midwestern states, including Wisconsin, with an emphasis on the intense cycle of 1997-98.

The expression of El Niño during that winter highlights the unpredictability of the phenomenon. Snowfall amounts were lower across much of the upper Midwest, with the largest decrease observed around the western Great Lakes, including northern Wisconsin. The seasonal distribution of snowfall was idiosyncratic, though. December 1997 snowfall was more than 50 percent below normal in Wisconsin, but conditions reversed in January 1998, with totals at 150 to 200 percent above normal, not counting lake-effect distribution. Come February 1998, warmer temperatures resulted in well-below-normal snow amounts in Wisconsin. And conditions switched again in March, with snowfall near or above normal across most of the state.

Determining the totality of the effects of the El Niño winter of 1997-98 is not possible, but researchers with the Illinois State Water Survey assessed broad impacts by examining news coverage, business and government reports, and insurance data. Across much of the United States, that winter brought extreme weather events to multiple locations. Record-setting rainstorms triggered flooding and landslides in California, unseasonable rainfall and tornadoes struck the Southeast, and severe ice storms affected the Northeast. By spring, 189 deaths and economic losses totalling around $4.2 billion to $4.5 billion were attributed to severe weather.

However, other effects of the El Niño made for multiple economic benefits in the United States. Savings far outweighed the dollar costs of weather-driven problems, and weather conditions likely prevented more deaths than they caused. "The net national effect was surprisingly positive," the Illinois State Water Survey noted in its 2000 report "El Niño 1997-1998 in the Midwest." At the broadest level, deaths attributed to winter-related conditions (primarily via exposure and vehicle collisions) were greatly reduced. So too were the costs attributed to hurricanes; that winter’s El Niño was considered to have reduced the number of Atlantic storms in the 1997 season. Overall, the report estimates the economic gains to have been upward of $19.6 billion, with around 850 lives not lost, both due to milder weather.

In the Midwest, the economic benefits flowed largely from warmer than average temperatures during the 1997-98 winter season, Illinois State Water Survey reported. These effects included a reduction in heating costs, as well as increases in home sales, construction, retail sales (of clothing and home supplies), and eating out at restaurants. The atypical winter weather affected transportation, with reduced motor vehicle collisions, flight delays and railroad delays, and an extended Great Lakes shipping season.