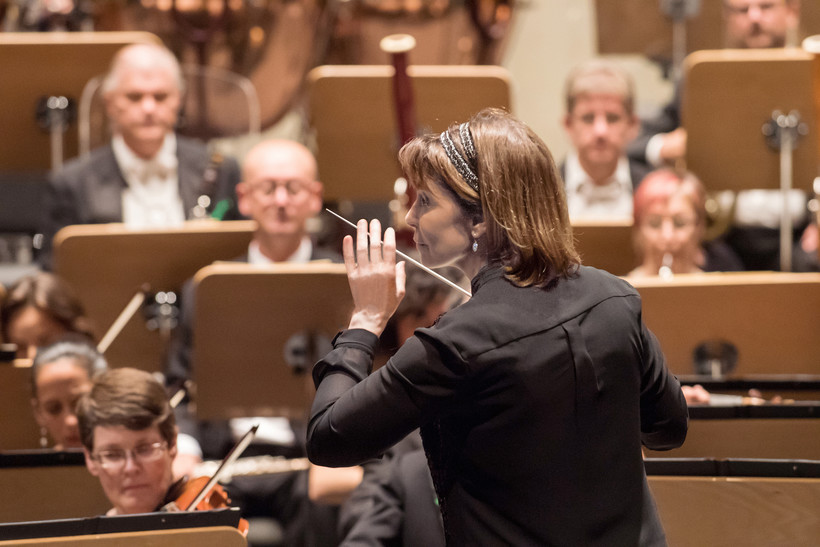 She recently spoke with WPR about her career, the orchestra and music both new and old.

Editor's note: This interview has been edited for brevity and clarity.

Norman Gilliland: You have 115 or so CD recordings to your credit. Which ones have been the most popular?

JoAnn Faletta: Some of the most popular have been the Gliere Symphony No. 3, Respighi's Rome trilogy of tone poems, the complete piano and orchestra works by Gershwin (with pianist Orion Weiss), and a collection of Duke Ellington's concert music.

NG: After 20 years conducting the Buffalo Philharmonic, are there works that you’d like to conduct but think that your audience might not be ready for them?

JA: I think our audience is really open to almost anything, but perhaps two challenging pieces I have yet to do are Schoenberg’s "Guerrelieder" and Messiaen’s "Turangalia."

NG: Some new works — this was true in Beethoven’s time too — have to be performed often in order to catch on. Do you ever program a new piece more than once to give it a proper hearing?

JA: Yes, we have, because we have the opportunity to either play them first, or to reprise them at the June in Buffalo Festival (the contemporary music festival at SUNY Buffalo).

NG: Do you like all of the music you conduct? Are you always able to work out artistic differences with soloists?

JA: While I do not always like a piece before I conduct it, I can honestly say that learning, rehearsing and performing a piece brings me so close to it, that I always like or even love it in the end.

While I feel a greater affinity to some soloists because of their approach to music, I have always found it possible to collaborate in a positive way with every soloist and to learn much from them.

NG: On the other hand, there are many excellent works from 100 years ago that have fallen out of the repertory. How did you select the repertory for the latest Buffalo Philharmonic CD, "Forgotten Treasures?"

JA: These were five pieces that we had performed in concert, and I had fallen in love with them.  There was not a possibility to get them on a Naxos recording (they usually only release single composer discs) and I was afraid that these pieces might be forgotten.  So we chose these five to put on a CD together, partly as a tribute to the open-mindedness of our audience, and the dedication of our musicians to unknown works.

NG: The "Forgotten Treasures" CD is on the Buffalo Philharmonic label. You’ve worked with various other labels in the past, including the prolific Naxos label. Will you be continuing with the BFO label primarily?

JA: We will continue with both Beau Fleuve (our own home BPO label) and with Naxos (we have several CDs in the pipeline or planning process for them: Richard Danielpour, Zoltan Kodaly, Florent Schmitt, Alexander Scriabin, etc.)

NG: There’s a lot of wonderful music by overlooked historical and contemporary women composers. For the sake of making up for lost time, do you feel particularly inclined to program their music?

NG: How do you make classical music appeal to audiences in their teens, 20s, and 30s? Or do you assume that your audience "grows" into an appreciation for classical music? What sort of demographics do you see at Buffalo Philharmonic concerts?

JA: Our demographic at the concert is very mixed and quite comprehensive.  We direct a great deal of money and attention at concerts for children (beginning in pre-school) and going through university.

NG: What’s the secret to conducting an orchestra for 20 years?

JA: Loving and respecting the musicians.

NG: How do you relax with music? You’re a classical guitarist. Do you still have time to play?

JA: I do play, although I consider myself to be a "lapsed" guitarist, since I don't practice as often as I would like.  I recently played two chamber music concerts and enjoyed myself enormously.  Guitar for me is the perfect foil or complement to the symphony orchestra.