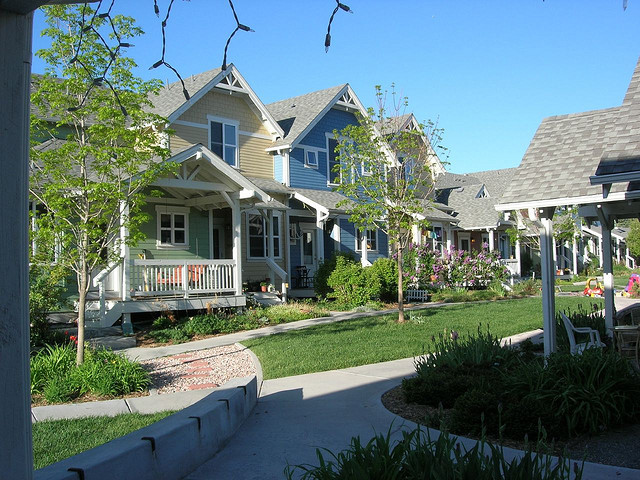 In a recent article for CityLab, freelance writer Chris Bentley suggests that an intentional and collaborative style of living known as “cohousing” could get a significant boost in popularity from an aging baby boomer generation.

Cohousing is currently very popular in Northern Europe, but still considered an unconventional idea in the U.S.

“The general idea is some sort of shared housing development that has the goal of creating an intentional community,” said Bentley. “So. rather than your neighbors just being whoever happens to move in next to you, you’re living beside — and in some cases with — a group of people that share your interests or have come together around a common idea.”

When most people hear the word “cohousing,” they think about the communes or cooperative housing popular among young people and popularized in the 1960s and 1970s. But, according to Bentley, modern cohousing is more centered on the idea that residents participate in the design and operation of their own neighborhood, while still emphasizing the privacy most Americans are accustomed to.

According to Bentley, the communities can range in size from a few families to 100 families, depending on how large the development is. All families have their own private space, and design shared spaces and resources like gardens, laundries, clubhouses and Internet services.

While doing researching for his article, Bentley found that cohousing projects are usually a multi-unit housing development that might be organized like a condominium or townhouse association, but with a different spirit.

Sharing spaces and services is what makes cohousing especially appealing to baby boomers. As boomers’ children leave the home, cost and downsizing are factors in determining where to live after retirement. Cohousing provides them an opportunity to downsize, share space, and even share everyday responsibilities among like-minded people.

Jerry McIntire and his family are founding members of Stones Throw Eco Village, a new cohousing community that is being developed in the southwestern Wisconsin city of Viroqua. The community will comprise newly constructed homes on 12 acres of bare land. One existing house on the development will be re-purposed as a community space.

“It will cost us around the same as the home we are currently in, yet our new home will be smaller. And yet we will share in a number of common facilities that will enable our home to be smaller, so that our expenses will be lower on a monthly and annual basis,” said McIntire.

According to McIntire, Stones Throw is an intentional community with a goal of building a sustainable people-oriented neighborhood that’s within walking or biking distance of the town center. The hope is to enable members to share resources, and to conserve through that sharing.

According to the Cohousing Association of The United States, three cohousing communities exist in Wisconsin, while several projects have started recently or are being planned.